The young guitarist Sean Shibe may still be in his mid-20s, but he's already built up a busy career as a soloist and broken new ground for his instrument - being the first guitarist to be picked as a BBC Radio 3 New Generation Artist, among other firsts.

For his Delphian debut recording, he's picked a programme of English guitar works from both Renaissance and more recent composers - intentionally eschewing the Spanish aspect of the instrument, at least for the moment. I caught up with Sean to talk about his stance on the Spanishness of the guitar, and on its role within the pantheon of solo instruments.

Where did you first get the idea to put an album of this kind together, focusing specifically on English repertoire?

This vein of repertoire is very substantial, but often overlooked because of the prominence that Spanish repertoire can have on a debut release. So it’s not actually that far out of the ordinary, and it’s a good way into the instrument. Spanish repertoire does have a lot of influence but I feel the instrument can express something deeper – the Spanish music at its best is wonderful but at its worst (and when badly played) can be a little trite.

How much do you think we owe today to Julian Bream, who by all accounts was one of the driving forces behind the revival of the guitar as a ‘serious’ instrument?

Everyone builds on what came before to the degree that their circumstances allow them. What Bream did was truly outstanding, but it’s by no means as simple as “Bream did the most”. It would have been harder for him to do what he did if Segovia hadn’t done what he did. So the trajectory of the guitar becoming a steadily more serious object isn’t down to just one person – it’s down to a succession of people who really believed in what they were doing, and really believed in themselves. It’s the same with anything – is the most progressive politician today more worthy of our admiration than the person who came before them? No, of course not. They all played their part in the time they lived in. Hey, you know this reminds me of something Faulkner said: “Don’t bother just to be better than your contemporaries or predecessors. Try to be better than yourself”. I think it sums up the banality of the idea of ranking artists, as people are wont to do (absolutely not implying that this is what you’re doing, but I feel that some people might read the question, or my answer, that way), and the importance of reflective ambition.

The instrumental landscape is still rather dominated by pianists, violinists and cellists; do you think there’s still work to be done to restore the guitar to its rightful place?

I don’t think it can compete with those instruments right now; how many concertos do we have as guitarists? Most people could only name Rodrigo’s. We don’t have that many great concert-hall-fillers. Actually, as an instrument, we don’t fit that size of hall so well: it’s the nature of the guitar. But of course that’s not to say that isn’t capable of great things. There’s no reason why great music can’t be written for it – as it has been in the past. If you consider the repertoire on the disc, there are pieces that are very innocent and very sweet, but then there are much more alien works, like the Britten Nocturne. It’s a fantastic piece and it can hold its own with any of the profounder works he wrote for other instruments.

The notes to this album quite rightly point out that for many years the guitar was almost exclusively a Spanish instrument; many of the twentieth-century composers featured on this disc show Hispanic influence in their music. Do you think it will ever be possible for the guitar to fully escape this Iberian heritage (and should it)?

No, I think we should admit what heritage we have, for better and for worse. It’s really important to acknowledge it. It’s been a source of great inspiration; Julian Anderson just wrote a piece called Catalan Peasant with Guitar for the Julian Bream Trust. It’s a fantastic piece – absolutely not engaging with the clichés of Spanish music, but creating a new kind of language.

How much of a contrast do you find from a performer’s perspective between the Renaissance works and the more modern ones?

There are different considerations to be made but it doesn’t mean that you have to approach them differently. They are very different pieces, but an approach to any one piece compared to any other will always be different. But I certainly didn’t go deep into Renaissance stylistic performance theory – I was trying to communicate what I felt was urgent and honest.

I can’t get too drawn down the authentic route – I am playing a guitar, after all! I’m very fond of taking advantage of what the guitar has to offer, in much the same way as I think Dowland would have done if he were using a guitar not a lute. And that means taking advantage of things like vibrato, and the gigantic range of colour we have (which is indeed the only range the guitar has – we don’t have volume or projection, so we’re really using colour to make the difference in phrases). These are things that didn’t exist in the Renaissance period in the way they do now, and they’re things that I could say I focus on.

I’m always wanting to devote more time to being more historically informed, but in terms of my approach to these pieces, at this time and with this instrument, you could even antagonistically frame it as being anti- historically-informed, given my focus on vibrato and colour range.

Do you have a personal favourite among these works?

Does a parent have a favourite child? It’s the same sort of situation. They can mean markedly different things so different children could be different kinds of favourites at different times. The piece that I do consistently find more in, and want more of, is the Britten. What he did was just so unusual, so original. And it’s by no means a simple play; after it was premiered it really didn’t get performed much by anybody apart from Bream for the next ten years because it was so difficult!

The Walton Bagatelles are so tricky – so much to deal with all the time, if you’re really trying to get to the crux of what they’re trying to communicate. And the Britten is exceptionally well-written; every note that he puts down is meant to be there, and that’s always a joy to be working through.

Then again, I really couldn’t say that Britten’s my favourite. I don’t favour it, but I do come back to it more because there’s more to explore, not because I prefer it to the others. The Arnold is exceptional as well, because it has such contrast – between his most tender writing ever in the ariettas and some of the most pointed, jagged, cynical stuff going on in other parts of the pieces. Dowland is a world unto himself, it’s like a microcosmos, and Walton is so bright, and Berkeley has the Spanish tinges (as much as we’re going to get in a disc from that part of the world). They really all mean different things. 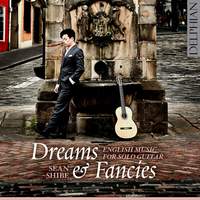 Dreams & Fancies was released on 21st July on Delphian. 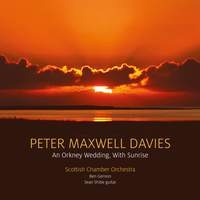 Sean Shibe features as a key contributor to this celebration of the music of the late Peter Maxwell Davies, released on Linn last September following his death in March and including An Orkney Wedding, with Sunrise as well as the beloved Farewell to Stromness from the Yellowcake Revue.