Recording of the Week,  The multi-talented Julia Fischer

Julia Fischer and Martin Helmchen’s first volume of Schubert Violin Sonatas released last year achieved fantastic reviews and sold in significant numbers. I imagine there are quite a few people like me therefore who have been eagerly awaiting the release of the second and concluding volume. Well, I’m pleased to say that the wait is finally over as it is released today, and it is not only as good as volume 1, but actually even better! 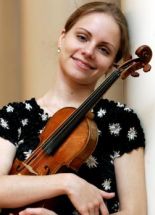 None of Schubert’s violin sonatas is particularly well known, but probably the most famous (and in my view the best) is his last one in A major, D574, which he wrote in 1817 and was nicknamed over thirty years later by the publisher ‘Duo’ (as compared to his earlier sonatas the piano becomes more of an equal partner). It is an immediately attractive work, full of fun and spirit. Fischer and Helmchen bring out this aspect superbly and sound like they’re enjoying themselves hugely. Phrasing is always natural and the way they match each other in the frequent motivic exchanges is typical of their complete unanimity throughout the disc.

The Fantasia in C major, D934 which follows is a much later work, written in 1827, just a year before Schubert died. It is brilliant, full of the sort of brooding intensity which is common in many of Schubert’s late works. It traverses a number of different emotions, with at least two of the movements based on Schubert’s songs. It has a lovely Andantino which Fischer and Helmchen successfully resist the urge to over-indulge, before the hushed tremolos of the opening movement return at the beginning of the finale to give the work a cyclic unity.

And that concludes the survey of Schubert’s works for violin and piano. Like the first disc Fischer brings a beautiful sweet tone with immaculate articulation and wonderful singing line, while Helmchen offers a remarkably sensitive and responsive pianism, with complete technical control and a deep understanding of the music. They could have ended the disc there, but at only 45 minutes it would have been a bit short, so as a remarkable bonus we’re treated to Julia Fischer’s recording debut as a pianist in one of the truly great works of the piano duet repertoire: Schubert’s Fantasie in F minor, D940.

It is a work full of drama and with a real richness and variety of textures. Fischer and Helmchen portray the different moods here with real characterisation – the dramatic passages are exciting are powerful, while the tender ones are beautiful and moving. Like in the violin sonatas they play with one voice throughout and it is actually very hard to tell them apart. Helmchen made a superb recording of Schubert’s penultimate Piano Sonata last year (D959) so you expect brilliance from him, but Julia Fischer’s playing is right up there, and it is very hard to believe that you are listening to someone playing their ‘second’ instrument. If you’re impressed as I am then you might want to keep an eye out for a DVD of her performing the Grieg Piano Concerto which is due out on Decca later in the year, but in the mean time I’ve put on a couple of samples below to help whet your appetite. 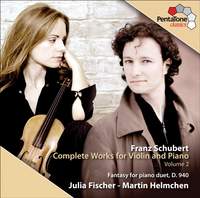