Recording of the Week,  Mozart Symphonies from Mackerras - Volume 2

One of our best selling discs ever is the Scottish Chamber Orchestra and Sir Charles Mackerras’s recording of Mozart’s late symphonies on Linn. It was released two years ago and has won several awards including Disc of the Year at the 2009 BBC Music Magazine Awards. I’d be surprised therefore if I’m the only one who has been eagerly awaiting the promised second volume. Well the wait is finally over as it is released today. Containing Symphonies 29, 31 (Paris), 32, 35 (Haffner) & 36 (Linz), it arguably completes the set of all the real masterpieces which Mozart gave to the Symphonic genre.

Just like in the first set, the combination of Mackerras’s lifelong experience of performing Mozart (he’s now 84) and the youthful and hugely talented Scottish Chamber Orchestra produces a recording of staggering quality. Produced by James Mallinson (a multi-award winning producer who also does all of LSO Live’s releases), the quality of the recording is equally breathtaking.

From the very first bars of Symphony No. 29 you immediately sense a vitality and transparency in the playing which will mark this recording out above virtually all others. The balance is superb and the rhythms so clear that you hear all the inner details of Mozart’s orchestration. The orchestra plays predominantly on modern instruments (with natural horns and trumpets) but with an acute awareness of period style, and this combination of rich orchestral colour and appropriate stylistic playing is hugely persuasive.

Mackerras paces the slow movements just right, never sounding rushed nor in the slightest bit dull. The phrasing always sounds natural, and even within very quiet passages there is a shape and elegance to proceedings. There is never any exaggerated slowing down at the end of phrases, nor any sentimentality or mannerisms. The finales crackle with electricity, the trumpets and drums play with a bright blazing splendour, and when the horns let rip there is a real thrill and excitement.

I don’t believe the concept of definitive recordings as I think there is almost always more than one interpretation that can be valid and have something interesting to say. That said, I can’t imagine a more persuasive version of these symphonies than this – so joyous and life-enhancing throughout and they come with my highest recommendation.

I’ve put a short video on the website for you to watch and, after a few thoughts from Sir Charles, there is a substantial excerpt from the first movement of the ‘Haffner’ Symphony to whet your appetite. Enjoy! 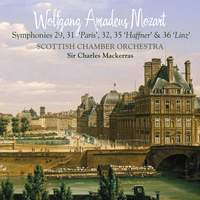