This week's Presto Q&A features my youngest interviewee ever: the Norwegian treble Aksel Rykkvin is just 13 but already has extensive experience in oratorio, recital and opera under his belt, including the title-role in Kurt Weill's 'Schuloper' Der Jasager which prompted to the Norwegian arts journal Periskop to praise 'radiance, intensity and seriousness' of his singing.

At the beginning of the year, Aksel travelled to London to make his first solo recording (with Nigel Short and the Orchestra of the Age of Enlightenment, no less) of sacred and secular arias by Bach, Handel and Mozart. It's a stylish and assured debut indeed: from the opening track (the florid first aria from Bach's Jauchzet Gott in allen Landen, which showcases his impressive agility as well as a clean, ringing top C!) it's immediately evident that he's already a singer with secure technique, thoughtful musicality and a tangible affection for the music he's performing. I'm crossing my fingers that someone books him to sing Yniold in Pelléas et Mélisande or Miles in The Turn of the Screw before the voice-change kicks in!

I got in touch with Aksel earlier this month to find out more about his inspirations and passion, his discovery of his voice, and his plans for the future…

Tell me a little about how you first began singing: how old were you when you started out, and what first inspired you?

My parents tell me that I loved singing from I was just a few years old. I would hum children’s songs all the time. My mom’s brother was a boy chorister, so she grew up going to boys’ choir concerts all the time. So it was quite obvious that she wished for me to be a boy chorister too. Since we live in Oslo, we contacted Oslo Cathedral Boys’ Choir. I was not even six years old yet, and actually too young for the choir. Still, since I was so motivated, I was accepted as an aspiring chorister. Two years later, I started in the main choir.

My father had started to play a lot of music by boy trebles for me to listen to. I remember some of them, Aled Jones and Paul Phoenix, and not least the splendid Benjamin Isachsen from my own choir in Oslo. I was amazed with how beautifully they sang, and I wanted to sing like them! Someone recommended that I should learn some standard treble solo songs in case I was asked to do one. So during our summer holiday that year, in a cabin on a small island, I practised every night on all these lovely songs. And luckily, during the following term I was asked if I could be a soloist, I think the first song was either “Pie Jesu” by Lloyd-Webber or “How beautiful are the feet” by Handel. And things just went on from there!

Which particular singers do you really admire – either in terms of other trebles, or further afield?

I always try to listen to recordings by Emma Kirkby when I am starting to learn new baroque arias. I love the sound of her voice and how it sounds so easy when she sings. Quite different from that, I also try to learn from the dramatic way Cecilia Bartoli sings. It was really special for me to be at her concert last year in Oslo. Andreas Scholl is another singer I really love listening to.

How did you choose the music on the disc? In particular, how does it feel to sing those arias that are almost always sung by women, such as Cherubino’s music from Le nozze di Figaro?

From the beginning, the first idea was to have a strict theme for the disc. But pretty soon, we decided to rather choose music that was appropriate for trebles, that I liked to sing and that drew on the strengths of my voice. One of Cherubino's arias, “Voi che sapete”, is not that unusual to sing for a boy treble on albums, I think. The other one, “Non so piu cosa son, cosa faccio”, is more rare for trebles. I still found both of them very comfortable and suitable for my style of singing. I really like the drama in them, the way you have to try to express conflicting emotions all through the songs, more so than with most of the other songs I recorded.

Do you have any feelings yet about what direction your voice might go in when it breaks, and is there any particular repertoire that you’re really looking forward to singing later on?

I don’t know at all. My father has a tenor voice type. I would prefer to be a tenor or even a countertenor, because they seem to have the most fun music to sing. I haven't really thought of repertoire beyond the voice change. However, as a treble, I would really like to get the chance to sing one of the larger boy's roles from the classical opera repertoire. I sing in the Children’s Chorus at the Norwegian Opera, which is just a marvellous place to be. I really enjoyed singing "the Boy" in Rolf Wallin's modern opera Elysium last year, and I have had great experiences singing main roles in children's operas and in "learning operas” like Der Jasager by Kurt Weill. Still, what I am really hoping right now is to fend off the voice change for another opera season, and maybe then I could get the chance to be on the main stage once more in one of the classics.

What are your plans for the future? Do you see yourself pursuing a career in music?

Oh yes, definitely. I can’t imagine any better life than to sing for work. I changed school last year, because I started at a program for classical musical talents which they only have at a certain school in Oslo called Majorstuen. The program is run by the best music institute for young people like me in Norway, the Barratt Due Institute of Music. Since now all my classmates are talented violinists, pianists, singers and so on, even when my voice eventually changes, there will be a lot of musical children around all the time. I think that will help me to get through it and continue, and of course I will also continue to get singing lessons. My voice teacher at school and in the Opera, Marianne Lewis, has helped loads of boys through their voice change, so we will figure out what is best for me. Later, if I can still sing, of course, the plan is to go abroad and study singing at a good institution.

Finally, what do you enjoy aside from singing?

I love to play football, and I play for my local team as often as I can. I also love to travel, especially if it’s for performing somewhere, in Norway or abroad. One other thing I really enjoy is going to the opera with my family to watch someone else perform. Nothing beats a spectacular live performance, I think! 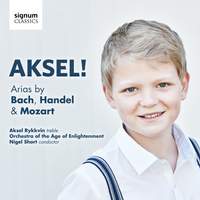 AKSEL! is released on 2nd September on Signum.