Pianist William Howard has recently begun a new project exploring the genre of the love song - the first instalment is simply a series of sixteen songs without words from the nineteenth and twentieth centuries, either composed or arranged for the piano (to be followed by a set of sixteen newly-commissioned works).

I spoke to William about how he put this fascinating album together, and about some of the relatively unusual pieces he's chosen to include.

Of all the songs available for you to choose from – surely a huge number – how did you decide which sixteen to feature on this album?

My starting point was to choose favourite pieces that I have enjoyed performing over the years, but I also felt it was important that the album should have variety and contrast. I put a lot of thought into the final choice of pieces and the order in which they appear on the album. I hope that my selection provides a kind of narrative through different aspects of love, with expressions of simple affection, undying fidelity or unbridled passion alongside songs of yearning and laments of bleak despair.

Some of them were originally written for voice and piano; do you think these lose anything by having the words removed and becoming purely instrumental?

To be honest, I am not very attentive to words when I am listening to songs, but for those listeners who are, something will inevitably be lost when the words are removed. The interesting question is whether a good arrangement can contribute something that makes up for this loss. Of the five song arrangements on the album, four are by Liszt. He brings to these transcriptions an extraordinary imagination for the expressive possibilities of the piano, with the result that they have become inspirational piano pieces in their own right. Liszt has no inhibitions about taking liberties with the original song to emphasise what he considers to be the essential character of the music. In Schumann’s Widmung, for instance, the passion of the original song is quite contained and kept beneath the surface. In Liszt’s piano solo version that passion is brought to the fore with thundering chords and arpeggios that span the whole keyboard. I am not sure Schumann would have approved, but it is a magnificent piano piece! The only other song arrangement on the album is Max Reger’s unembellished version of Richard Strauss’s Morgen. I cannot claim that this is a great piano piece in its own right. In fact it is arguably an impossible challenge to replicate the delicate interweaving of solo violin and voice on solo piano, but the sublime mood of the song is so perfect for rounding off the album that I couldn’t resist including it.

Obviously all these pieces have their own individual character, but if you had to pick one as your favourite, which would it be?

That’s a really difficult question, since so many pieces on the album are long standing favourites of mine. But if I have to pick one, it would be Liszt’s arrangement of Schubert’s Ständchen. This is one of Schubert’s most hauntingly beautiful songs. Written only months before his death at the age of 31, it seems to contain a lifetime of emotional experience. Liszt’s version is restrained (compared to Widmung) but still full of ravishing pianistic touches.

Many of these works are by Czech composers – both well-known names such as Smetana, Dvořák and Janáček and the slightly less familiar Fibich, Suk and Novák – and you mention that you’re particularly keen to champion Czech music. Why is this so important to you?

I developed a passion for Janáček’s music while a student in the 1970s, which led me to make several visits in the 1980s to what was then Czechoslovakia for both study and concert performances. Even a modest concert fee was difficult to spend in communist times, and Czech currency could not be exchanged or taken out of the country. Consequently I used to come home with suitcases crammed with second hand music, and thus discovered a new universe of glorious Czech piano music which was largely unknown at that time in the UK. In was no coincidence that my first three solo recordings were of piano works by Smetana, Dvořák and Fibich, but I also performed works by Dussek, Suk, Vítěslav Novák, Martinů and many others. The romantic Czech repertoire is especially rich in short, expressive and often autobiographical piano pieces, so, given my love of this repertoire, it is no surprise that half of the sixteen love songs on my album are by Czech composers.

You also refer to this album being part of a wider project – can you tell us any more about this? Are there more volumes of love songs on the way?

Throughout my performing career I have been interested in working with living composers and commissioning new works. While thinking about the album of romantic love songs and the enduring popularity of many of them, I started wondering what a 21st-century equivalent to these pieces would sound like. I asked a handful of composer friends what they would make of the idea of writing a short piano love song and received such enthusiastic responses that I set myself the goal of commissioning a companion set of sixteen contemporary love songs. Looking further ahead, I hope these pieces will form a second recorded album. The funding for the commissions has now fallen into place, so I am currently finalising my list of composers for the project. I have also launched a competition, open to composers of all ages, to write a love song for solo piano. The idea of both the commissions and the competition is to use a universally familiar genre of music to throw a spotlight on the fascinating and hugely varied musical languages of our most talented composers. I hope that this project will encourage new audiences to appreciate their work.

Further information about William Howard’s Love Song Project, including details of the composing competition, can be found on his website www.williamhoward.co.uk 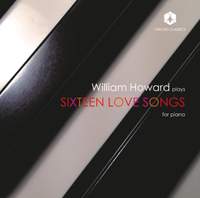 Sixteen Love Songs was released on 29th May on Orchid Classics.