The folk image of Mozart as a child-genius who, in the words of Michael Flanders, was already composing prolifically “at the age of about eighteen months” is a popular one, but it’s relatively rare for his very early works to actually be performed or recorded, and indeed some of his most-loved works are from toward the end of his short life – the Requiem, the Clarinet Concerto, The Magic Flute, the Ave Verum and so on. 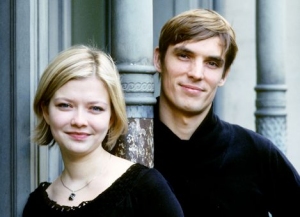 It’s a pleasant change, then, to hear some of his earliest compositions on this new album from Alina Ibragimova and Cédric Tiberghien – in fact, the second work is the first violin sonata Mozart ever wrote, aged somewhere between six and eight. Ibragimova has selected seven sonatas in total that span the composer’s whole life – up to No. 33, composed in late 1785.

Both the musical form and the composer himself developed during this time – there’s a clear progression in style that traces the evolution from the early works, written on the model of works by Schobert and Eckard as primarily keyboard sonatas with optional instrumental parts, to the later (and more familiar) model of two largely equal musical partners.

It’s tempting to be jaded about works of this period – unfortunately there’s a sense among a lot of classical music fans that the truly prolific composers of this era sacrificed quality for sheer quantity, and inevitably that carries with it a risk of correspondingly formulaic performances. But of course this whole line of thought is mistaken; a piece of music doesn’t need to be an earth-shatteringly overwrought musical cosmos to have value, and the great skill of the prolific composer is that they can compose both light-hearted entertainments (such as the early works on this album, probably mostly for amateur, domestic performance), and works with a heavier emotional cargo, with equal skill.

And this is exactly what Ibragimova’s performances highlight – just as with her Bach concerto disc last autumn, she tailors her style to each sonata rather than adopting a one-size-fits-all policy. Where the music is intense and deeply-felt, she gives it the passion it needs; where it’s the light-hearted musical playing of a child, she allows this feeling to take over.

Nowhere is this clearer than in the G major sonata, K379, that begins the second disc; the sonorous rippling chords and suspensions in the piano set a much more yearning tone than had been apparent on the first disc, and Ibragimova responds in kind in her playing – effortlessly switching personalities from a participant in an afternoon’s domestic music-making to the protagonist of a dramatic and at times turbulent musical journey.

Given the different relationship between pianist and violinist in the earlier sonatas it would be wrong to gloss over Cédric Tiberghien as ‘just’ the accompanist on this album. Indeed those early works were written at least in part to show off the young Mozart’s piano skills, and there’s a lot of fiendish passagework for the piano that is very much more than mere backing to the violin. Historically-informed purists might raise an eyebrow at the use of a modern piano rather than a fortepiano, but Tiberghien’s touch and approach are very much sensitive to the style of the music. No blurry overpedalling or hammering fortes here; indeed the lightness of his playing is noticeable, and welcome, throughout.

The fluidity of the partnership between Ibragimova and Tiberghien is key to the success of this album – in the earlier works the piano is to the fore, while in the others the balance swings more towards the violin, and in each case they’ve evidently thought about where the right midpoint lies between the two extremes. There’s never any sense of the “wrong” instrument hogging too much of the limelight, and the result is simply effortless listening, with the two musical roles complementing each other perfectly. 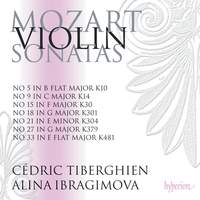