Following hot on the heels of Stephen Hough's exemplary recording of piano concertos by Dvořák and Schumann that I wrote about a fortnight ago, this week it's the turn of another outstanding pianist in the form of Paul Lewis, who performs Brahms's First Piano Concerto with the Swedish Radio Symphony Orchestra conducted by Daniel Harding. 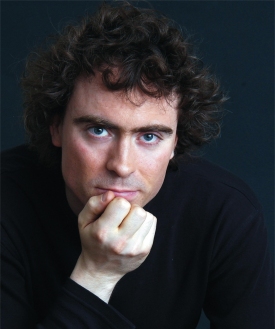 From the very opening chord of the orchestral introduction, with its ominous timpani roll, it struck me that Harding has opted for an intensely dramatic reading of this piece, with plenty of Sturm und Drang on offer. Even cello and bass passages that in other performances might be relatively calm are injected by Harding with a turbulent feeling that makes the whole thing rather unsettling. It makes for a pleasingly mysterious take on a familiar piece, and serves as a great prelude for the entry of Paul Lewis.

Speaking of that very first entry, the way Lewis gently but assertively glides in, almost as if he has actually been playing all along but it's only now that he has decided to make us aware of his presence, is a great moment, and sets the tone for his entire performance. So many times during the first movement I found myself remarking upon Lewis's seamless integration with the orchestra, obviously positioning himself front and centre where necessary, but equally not being afraid to take a back seat on occasion and allowing himself to accompany the orchestra rather than dominate it. To my mind this speaks of a highly intelligent, thoughtful interpretation, with absolutely no sense of ego or the notion that he is “the soloist” and therefore more important than anyone else!

If the opening of the movement is all stormy and tempestuous, then there are certainly moments elsewhere for Lewis to display his lyrical, gentler side. The F major section about seven minutes into the movement (Poco più moderato) is a model of cantabile playing, with a sweet tone and a tasteful, judicious use of rubato to highlight a particular harmony or to shape a phrase.

This mood is also very much present in the second movement, where I was enthralled by some wonderfully silky, ethereal playing from the strings, aided by some bassoon playing with real warmth. Again, Lewis's first entry is a delight: he just drifts in perfectly, effortlessly matching the sound and atmosphere that the orchestra have created. His part is marked molto dolce espressivo, and to say that his playing here is both very sweet and expressive would be an understatement indeed!

The third movement gives Lewis much more of a chance to show off his formidable virtuosity, and display it he does, with some nimble passagework one moment alternating with impassioned playing the next, and some impressive trills in the brief cadenza towards the end of the piece. The final few pages are very exciting too, with the timpani making a fine contribution in the last few bars just as they did at the very beginning of the piece.

After the thrills and spills of the concerto, Lewis leaves his Swedish colleagues behind and offers an equally authoritative performance of the Four Ballades, Op. 10 for solo piano. As in the concerto, the range of colours that Lewis offers us is quite something, from the stark, bleak opening of the first piece in the set, to the tender simplicity of the second, the rhythmic quirks of the third, and the elegant grace of the fourth. They make for a fine coupling to an excellent performance of the concerto. 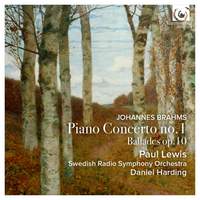