The colourful history of Donizetti’s uncompleted grand opera Le Duc d’Albe is almost worthy of operatic treatment in itself. Set in Spanish-occupied Flanders and based on the same libretto as Verdi’s Les Vêpres siciliennes (which premiered a decade after Donizetti reluctantly abandoned the half-finished project following wranglings with a difficult prima donna and ensuing legal battles between impresario and librettist), the existing score was fleshed out after the composer's death by his one-time pupil Matteo Salvi, and enjoyed brief popularity in the 1880s in an Italian-language version which alters the names of the leading characters (Hélène and Henri), who had by then become indelibly associated with Les Vêpres. It then fell into obscurity until the conductor Fernando Previtali came across a score by chance in the 1950s and made the first of half a dozen twentieth-century recordings of the work in its Italian incarnation. 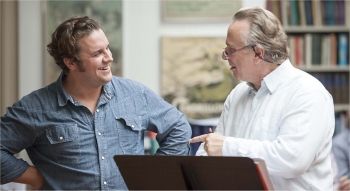 Sixty years on, Opera Rara have other ideas. Deeming Salvi's completion to be unacceptably anachronistic (more Brahms than Donizetti, apparently!), Sir Mark Elder and his team have opted to record just the two acts which Donizetti so very nearly completed, in the original French and with flesh put on the few remaining bones by Martin Fitzpatrick. On paper this might sound like a slightly raw deal - the score’s so involving and appealing, and the performance so gripping that I won’t pretend I wasn’t dreaming of what Donizetti might have done with dramatic denouement, which (spoiler alert) sees the heroine’s attempt to avenge her father’s murder go tragically pear-shaped – but what we have here still adds up to a satisfying and unfailingly authentic package, and in practice it’s not so very different from enjoying the single movement of Mahler 10, or the Schubert Unfinished.

As one might expect from a score dating from the Parisian phase of Donizetti’s career, the emphasis is very much on through-composed musical drama rather than on vocal display as an end in itself: though there are some memorable set-pieces for the choruses of invading Spanish forces and the Flemish rebels (the second-act chorus of oppressed Belgians surely rivals that of Verdi’s Scottish refugees in Macbeth, and what opera isn’t improved by a hymn to the strength of Belgian beer?!), there are very few stand-alone arias, and coloratura pyrotechnics are used relatively sparingly in comparison to the composer’s earlier works in the Italian style.

That said, it’s hard not to be knocked sideways by the sheer vocal charisma of Michael Spyres as the hot-headed Oedipal rebel Henri de Bruges, forever crying havoc against the eponymous Duc (the ever-excellent Laurent Naouri, wringing every last drop of malevolence and sympathy from his single appearance in the first two acts), whilst blissfully unaware that he’s actually the nobleman’s estranged son. Sadly the inevitable ‘I am your father’ moment doesn’t survive, but their ten-minute scene together at the close of Act One is no small consolation – shades of the great ‘Friendship duet’ from Verdi’s Don Carlo[s] here, in terms of the unwitting empathy between the characters if not the brotherly warmth!

With a big, bright, mettlesome instrument that easily encompasses the role’s wide range, American soprano Angela Meade is formidable as Hélène, daughter of the recently executed Count d’Egmont, splendidly defiant in the first act as she answers her intimidators’ threatening demands for a song with a rallying-cry for the Flemish rebels, and heart-breaking in the great lament for her murdered father in the second. She and Spyres are a vocal match made in heaven (surely a casting-director’s dream for a number of hard-to-cast Verdi couples, not least their counterparts in Vêpres), capping off their glorious extended Act Two duet with simultaneous bull’s-eye top E flats.

All in all, then, the new recording more than lives up to Opera Rara's mission to resurrect bel canto gems which are not merely obscure but also genuinely well worth hearing! You can read more about their plans for the next couple of years via the link below – and next week will bring an exclusive interview with Michael Spyres about his career to date and his role in Le Duc d’Albe… 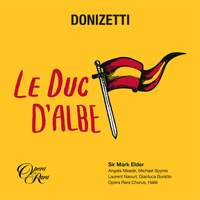