As its title suggests, Richard Strauss's 1903 tone poem, Symphonia Domestica, is an autobiographical work, depicting life at home with the Strauss family, including themes for father, mother, and child. It is not performed quite as often as many of Strauss's other tone poems, but hopefully a fantastic new recording from Marek Janowski and the Rundfunk-Sinfonieorchester Berlin will go some way towards redressing that. 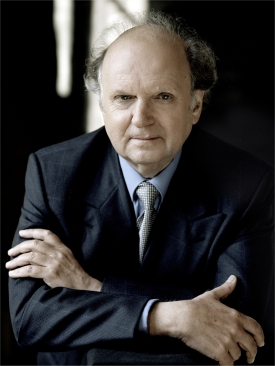 Perhaps part of the reason why it is relatively rarely programmed may be the extreme difficulty of the orchestral writing (not that his other works are exactly easy, mind you!). This piece is particularly notorious for the fiendish nature of the horn writing, both in terms of dexterity and sheer altitude – with numerous top Cs thrown in all over the place. Indeed, at one point towards the end the principal horn is asked to exceed this “textbook” top note and ascend to a high E, no doubt a moment of terror for many horn players. Fortunately, the Berlin horns rise to the challenge and despatch this passage and many others fearlessly and with great virtuosity.

In fact, there’s tremendous playing throughout, including a tender solo for oboe d’amore, and string playing of great depth and warmth, not least in the Adagio section of the piece, given the title by Strauss of “Liebesszene” (“Love Scene”). Janowski paces this section beautifully, and the climax of the section is ferocious: after a high shriek from oboes, violins, and violas, the two themes for the father and the mother come together in a bitonal outburst from the entire orchestra.

It’s not a small orchestra, either: as well as eight horns and the aforementioned oboe d’amore, Strauss includes optional parts for a saxophone quartet. Although a lot of the time the orchestra is used relatively sparingly, with almost chamber-like textures, when the full orchestra goes for it it’s quite a sound (conductor Hans Richter once quipped that “all the cataclysms of the downfall of the gods in burning Valhalla do not make a quarter of the noise of one Bavarian baby in his bath”), and it takes an expert ear such as Janowski’s to be able to balance such enormous forces so that all of the details come through without sacrificing any of the power: I could hear tiny little touches of orchestration such as delicate harp chords that normally get lost amidst the mêlée of brass.

Another major attraction of this new disc is the coupling: a work from 1928 for male chorus and orchestra called Die Tageszeiten, which I must admit was entirely new to me. This four-movement setting of Eichendorff texts depicting various times of day is a delightful work, especially when performed as wonderfully as it is here. It has sometimes been described as the “Four Last Songs for Choir”, and it’s easy to hear what people mean by that. The final movement, Die Nacht, struck me as highly reminiscent of Im Abendrot (the final song from the Four Last Songs, also an Eichendorff setting), and the style throughout is pure Strauss: the opening horn solo of the same movement couldn’t really be by anyone else!

The men of the Rundfunkchor Berlin are magnificent, with such a wide range of tone and dynamics, from the ringing splendour of the very opening of the piece to their hushed, tender sound in the work’s closings bars. It was a pleasure to get to know this piece, and it makes for a worthy coupling to a very fine performance of Symphonia Domestica. 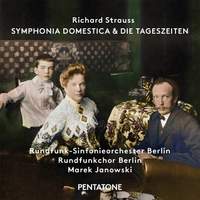