I’ve decided not to bother with any attempt at New Year’s Resolutions of my own this year (reviewing the last batch, I see that I’ve conspicuously failed to either achieve Grade One on a brass instrument or significantly expand my paltry knowledge of organ music), but instead I thought I might just take a few moments to look back on 2014 in music and cast a swift glance at what the coming twelve months might bring.

New Year is a very much a time for tradition, and one of our own bitter-sweet annual rituals here at Presto is to compile a short video tribute honouring some of the great musicians who passed away in the course of the last twelve months – this year, we’ve chosen the elegiac slow movement of Bruckner’s Ninth Symphony, conducted by the late Claudio Abbado (d. 20th January) to accompany the montage of artists including Carlo Bergonzi, Christopher Hogwood, Frans Bruggen and Magda Olivero. 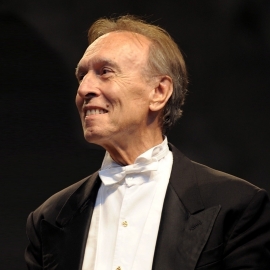 On to more cheerful matters. Thanks to some of the significant composer anniversaries which fell in 2014, we’ve seen some wonderful contributions to the discographies of Rameau, CPE Bach and Gluck in particular, several of which scooped major record-industry awards as well as featuring in our own Discs of the Year - the Iranian harpsichordist Mahan Esfahani did sterling work on two fronts here, following a Gramophone Award-winning CPE Bach disc with an equally stunning Rameau recital in the autumn. (Our 100 Best Discs of the Year, and our ultimate Top 10, are all available to browse here, and will remain at discounted prices until 18th February).

Looking ahead on the anniversary front, 2015 looks set to be similarly fruitful, with Glazunov, Nielsen and Sibelius all celebrating their 150th birthdays: the eagle-eyed amongst you may already have noticed that we’re now listing a very exciting (and very recently-recorded!) account of one of the latter’s best-known symphonies, which Chris enterprisingly sourced across The Pond from the orchestra itself shortly before Christmas… I’m sure one of my colleagues will be singing its praises from the rooftops in full detail once they’re back from holiday so I won’t give too much away just yet, but in the meantime feel free to do some sleuthing around our future release pages and see if you can spot it!

Further off the beaten track I’m sure we can also expect some commemorative recordings of Cipriano de Rore (d. 1565), William Cornysh (b.1465), Sergei Taneyev (d.1915) and very probably a fair few recital-discs including ‘O sole mio’ thanks to the 150th anniversary of Eduardo di Capua’s birth! Next year also sees two important birthdays for living composers: the Estonian minimalist Arvo Pärt turns eighty, whilst choral supremo John Rutter is 70, and though I’ve not yet heard any specific recording-rumours I can’t imagine that either of these will go unmarked on disc!

This past year has seen a fair few developments here at Presto, including the introduction of new editorial features such as exclusive interviews with artists and composers, the ‘Presto Recommends’ series and our in-house Manufacture On Demand range – we do hope you’ve found these innovations useful and interesting, and look forward to sharing more new ideas in 2015. It only remains for me to thank you all for your custom and contributions over the past twelve months and to wish you a very Happy New year on behalf of all of us!