The compositional style of French composer Olivier Messiaen can only be described as staggeringly diverse. Drawing on influences from around the human world (including Western serialism and traditional Japanese and Indonesian music) and from nature (particularly birdsong), he forged a unique and instantly recognisable style that expressed his profound Roman Catholic spirituality.

A professional organist in Paris for many decades, his output for this instrument is considerable (and dominates his reputation in most people's minds); however, he also composed numerous solo songs as well as large-scale orchestral works - his Turangalîla Symphony is among the largest works ever written in terms of the instrumentation called for - and a single opera. 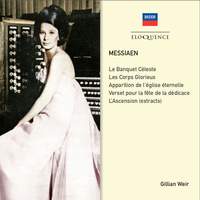 It would be nothing short of a crime to survey Messiaen's organ works without including Gillian Weir, a long-time champion of these highly original yet deeply reverent pieces. Apparition de l'Eglise Eternelle (Vision of the Eternal Church) is a particular favourite of mine - an early work in which Messiaen's style was clearly not yet fully formed, yet already showing his sense of awe when writing works on divine and mystical themes. 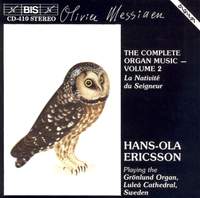 Messiaen's organ works are often meditations on, or responses to, elements of Christian (and particularly Roman Catholic) faith - in this case the birth of Jesus. Familiar characters such as the shepherds and Wise Men make an appearance, but this is no banal nativity scene; the final movement, Dieu parmi nous (God among us), in particular, is a paean of joy that borders on the ecstatic. 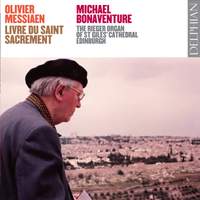 Less a singular "work" and more a collection of pieces on the theme of the Eucharistic celebration, the Livre du Saint-Sacrement (Book of the Holy Sacrament) was Messiaen's last and longest composition for the organ, composed in the wake of a visit to the Holy Land that seemingly made a great impression on him. Here, Michael Bonaventure plays the organ of St Giles', Edinburgh; yet the sound he draws from the instrument is as French as one could wish for. 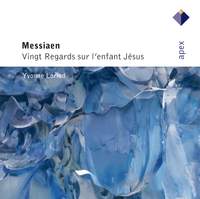 Yvonne Loriod (Messiaen's second wife) commonly appears at the piano on records of his works. I wouldn't want to let her steal the show too much, but her rendition of the Vingt Regards (Twenty Contemplations on the Infant Jesus) is really second to none. The range of styles is enormously wide, yet she has the technique and sensitivity to bring the full spectrum out. 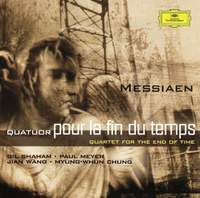 The Quatuor pour la fin du temps (Quartet for the End of Time) was written and premiered under grim circumstances - in a concentration camp after the Fall of France, on battered and poor-quality instruments. Yet there's something inescapably compelling about the series of apocalyptic visions it presents. The quartet on this recording play with intensity and passion - Paul Meyer's solo movement (Abîme des oiseaux) is a particular gem. 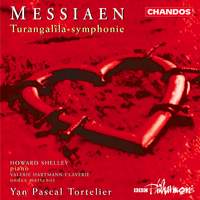 Perhaps Messiaen's greatest work, the Turangalîla Symphony is his take on the Tristan and Isolde legend, yet without the tortured angst and guilt of Wagner's version; Messiaen's is an ecstatic and sensual hymn to human love. The sheer size of the monster orchestra he specifies makes this a daunting work to perform or record, yet a number of excellent accounts exist. For me, the balance tips in favour of Tortelier and the BBC Philharmonic for the light-hearted abandon that they bring to movements 5 and 10. 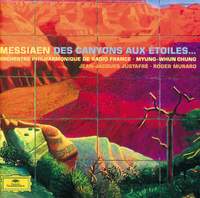 Des Canyons aux Étoiles is an unusual work for Messiaen – a kind of concerto grosso for piano, horn, xylorimba and glockenspiel soloists with orchestra that celebrates the beauty of the canyons of Utah, the songs of birds and the majesty of outer space. Messiaen himself observed that "all of the woodwind parts are difficult" – true enough of most of his works, but particularly so here. All the more credit, then, to the French Radio Philharmonic Orchestra, who give a dazzling account under Myung-Whun Chung. 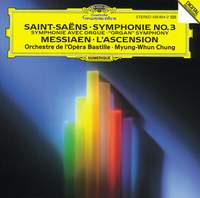 The instrumental version of L'Ascension merits a separate mention – not least because Messiaen composed a completely new third movement for it. Myung-Whun Chung is again at the podium, this time with the Orchestra of the Opéra Bastille. The majestic brass of the first movement set the tone, but it's the rapturous, shimmering string tremolandos of the second (Alleluias sereins d'une âme qui désire le ciel, or ''Serene Alleluias of a soul that longs for Heaven'') that really made me sit up and take notice. 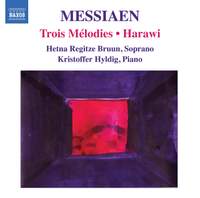 Both the song-cycles on this disc were written in response to close personal tragedies affecting the composer; yet very little of Messiaen's music can be said to sound truly sad or despairing, and so it is with these pieces; the overall sense is of hope and serenity, and of a deep religious faith underpinning the music. Hetna Regitze Bruun’s voice is light and youthful-sounding, and Kristoffer Hyldig is a sensitive and flexible accompanist. 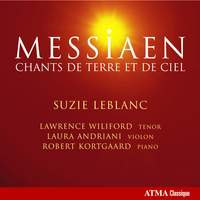 This comparatively unknown song-cycle is in some ways curious; it lacks the introverted feel of many solo vocal works, being instead consistently full of joy with only occasional moments of darkness. They are engagingly sung here by Suzie LeBlanc, with Robert Kortgaard at the piano, and complemented by the Trois Mélodies and two works for violin and piano. 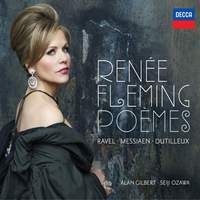 Renée Fleming is on beautiful form in these sensually-charged love-songs, dedicated by Messiaen to his wife (nicknamed ''Mi''). Fleming has long championed French song in particular, and when listening to this enchanting album it's hard not to be won over. Similarly voluptuous works from Ravel and Dutilleux form the perfect counterpart. 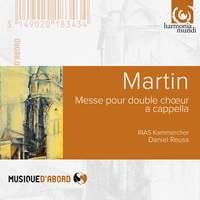 Cinq rechants is a true choral tour de force - a Surrealist setting of nonsense syllables, unvoiced percussive sounds and disconnected phrases. The underlying theme is again that of love - the texts used include the tales of various legendary lovers. An immensely rewarding musical experience, complemented by the exquisite Communion motet O sacrum convivium - my personal favourite among all Messiaen's varied compositions. 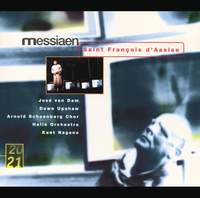 Sometimes compared to Wagner's Parsifal in scope and subject matter - at least in a broad sense - Saint François d'Assise is a remarkable work in its own right, all the more so for its uniqueness. Messiaen produced hardly any stage music and this is his only opera; his mature style is on scintillating display throughout the full four-hour work, as is his devout faith. Kent Nagano's cast and the Hallé Orchestra provide a mesmerising performance. 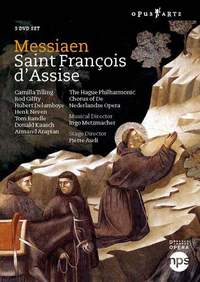 With Rod Gilfry in the title role, this performance by the Netherlands Opera is grandiose in scale, both in terms of the music itself and of the visual imagery deployed by director Pierre Audi. The incorporation of children in the Sermon to the Birds scene is a particularly delightful touch.