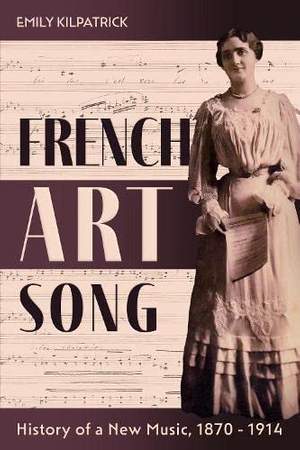 A ground-breaking study of the musical and literary priorities, professional practices and creative interactions that shaped one of the most adventurous artforms of the Belle Epoque. French art song, or melodie, was one of the most radical and exploratory artforms of the late nineteenth and early twentieth centuries. It was also among the most intimate, a genre of experimentation, hesitation and unfiltered artistic conversation. In this landmark history, Emily Kilpatrick charts the compositional preoccupations and literary stimuli, the friendships and rivalries, critical narratives and performance practices that shaped French art song between 1870 and the First World War. She traces the expanding horizons of an essentially new musical idiom, moving from the lively debates of the avant-garde to the social and artistic contradictions of the salons, the pedagogy of the Paris Conservatoire, and the eventual accession of song to the concert platform and a central place in the world's musical imagination. The melodie of the Belle Epoque flourished amidst a culture of creative collaboration, and through the musicianship and advocacy of performers as well as composers. Setting key works by Faure, Duparc, Chausson, Debussy, and Ravel alongside historical curiosities and hidden gems, French Art Song: History of a New Music probes composer-performer relationships and the shaping of performance traditions and addresses the challenges faced by the twenty-first century interpreter. Kilpatrick twines cultural history with musical insight and a wealth of previously unpublished source material in a wide-ranging and richly detailed account of the public and private faces of musical invention.