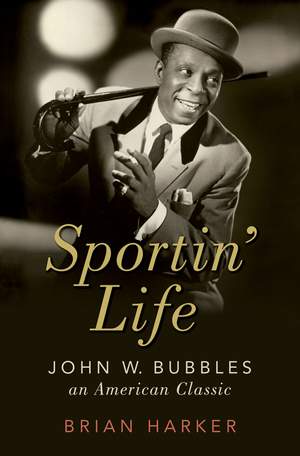 John W. Bubbles was the ultimate song-and-dance man. A groundbreaking tap dancer, he provided inspiration to Fred Astaire, Eleanor Powell, and the Nicholas Brothers. His vaudeville team Buck and Bubbles captivated theater audiences for more than thirty years. Most memorably, in the role of Sportin' Life he stole the show in the original production of Gershwin's Porgy and Bess, in the process crafting a devilish alter ego that would follow him through life. Coming of age with the great jazz musicians, he shared countless stages with the likes of Duke Ellington, Cab Calloway, and Ella Fitzgerald. Some of his disciples believed his rhythmic ideas had a formative impact on jazz itself. In later years he made a comeback as a TV personality, revving up the talk shows of Steve Allen and Johnny Carson and playing comic foil to Bob Hope, Judy Garland, and Lucille Ball. Finally, after a massive stroke ended his dancing career, he made a second comeback-complete with acclaimed performances from his wheelchair-as a living legend inspiring a new generation of entertainers. His biggest obstacle was the same one blocking the path of every other Black performer of his time: unrelenting, institutionalized racism. Yet Bubbles was an entertainer of the old school, fierce and indestructible. In this compelling and deeply researched biography, his dramatic story is told for the first time.