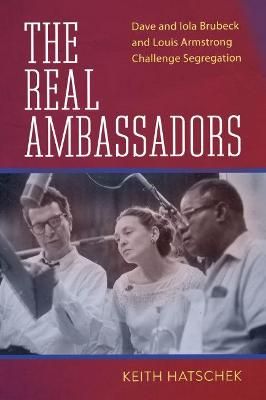 Keith Hatschek tells the story of three determined artists: Louis Armstrong, Dave Brubeck, and Iola Brubeck and the stand they took against segregation by writing and performing a jazz musical titled The Real Ambassadors. First conceived by the Brubecks in 1956, the musical's journey to the stage for its 1962 premiere tracks extraordinary twists and turns across the backdrop of the civil rights movement. A variety of colorful characters, from Broadway impresarios to gang-connected managers, surface in the compelling storyline.

During the Cold War, the US State Department enlisted some of America's greatest musicians to serve as jazz ambassadors, touring the world to trumpet a so-called "free society." Honored as celebrities abroad, the jazz ambassadors, who were overwhelmingly African Americans, returned home to racial discrimination and deferred dreams. The Brubecks used this double standard as the central message for the musical, deploying humor and pathos to share perspectives on American values.

On September 23, 1962, The Real Ambassadors's stunning debut moved a packed arena at the Monterey Jazz Festival to laughter, joy, and tears. Although critics unanimously hailed the performance, it sadly became a footnote in cast members' bios. The enormous cost of reassembling the star-studded cast made the creation impossible to stage and tour. However, The Real Ambassadors: Dave and Iola Brubeck and Louis Armstrong Challenge Segregation caps this jazz story by detailing how the show was triumphantly revived in 2014 by Jazz at Lincoln Center. This reaffirmed the musical's place as an integral part of America's jazz history and served as an important reminder of how artists' voices are a powerful force for social change.