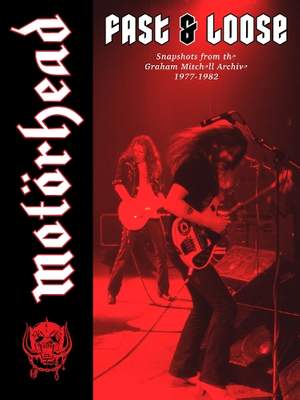 One of the most influential hard rock bands of all time, Motoerhead mixed rock, punk, and heavy metal into an aggressive blend of pure explosive energy. Between 1977 and 1982, the classic "three amigos" lineup of the band (Lemmy Kilmister, Phil "Philthy Animal" Taylor, and "Fast" Eddie Clarke) toured relentlessly, and recorded a half dozen classic albums that continue to impact the music world today. During that period, Graham Mitchell was, in his own words, "their tour manager, their babysitter, their procurer of women, their procurer of drugs, procurer of everything." Somehow, in the midst of the whirlwind, Graham managed to pick up his camera and snap amazing images of the group that document the raw power of the band with an intimacy that only an insider could capture. Presented in large format, and featuring nearly 100 snapshots, many that have never been seen before, Fast & Loose is an inside look at a one-of-a-kind group that is essential for any diehard fan.