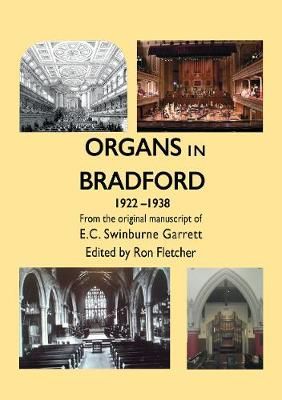 New, Organs in Bradford 1922-1938: From the original manuscript of E.C. Swinburne Garrett

Organs in Bradford casts a spotlight on an almost lost world and includes a comprehensive list of the featured churches, organs and organ builders. Ron Fletcher honours his former teacher and exemplar with publication of these selected extracts from E.C. Swinburne Garrett's 1,633 ledger-sized pages of hand-written organ specifications. E.C. Swinburne Garrett began his research as a 19-year-old in 1922 and completed the work in 1938. Ron Fletcher's first task was to create a usable index and then to search for images to support the text as a result of which he has compiled a veritable library of printed documents much of which goes back to the 18th century and in some cases earlier. An unexpected outcome, the book reveals, is the number of churches and chapels and cinemas which have disappeared, or in some cases been re-modelled, as housing or for other utilitarian purposes. It would be intriguing to develop a map for a conducted walk to the lost churches of Bradford. In the 19th century, the huge number of churches and chapels in Manningham were the result of demand for space in a place of worship. New churches were built, and existing churches were rebuilt or enlarged - the people demanded seating! This is not a complaint one hears often today!