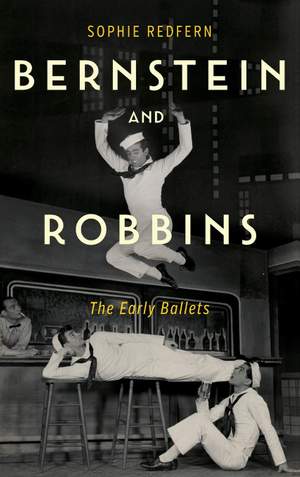 Leonard Bernstein and choreographer Jerome Robbins stand as giants of the musical-theatre world, but it was ballet that launched their stage careers and established their relationship. With Fancy Free (1944), their triumphant debut collaboration produced by Ballet Theatre, Bernstein, Robbins, and set designer Oliver Smith - all only twenty-five years old - captured the spirit of wartime New York, created a defining ballet of the period still widely performed today, and became overnight sensations. The hit musical On the Town (1944) and a now largely forgotten ballet, Facsimile (1946), followed over the next two years.

Drawing extensively on previously unpublished archival documents, Bernstein and Robbins: The Early Ballets provides a richly detailed and original historical account of the creation, premiere, and reception of Fancy Free and Facsimile. It reveals the vital and sometimes conflicting role of Ballet Theatre, explores how Bernstein composed the scores, sheds light on the central importance of Oliver Smith, and considers the legacy of these works for all involved. The result is a new understanding of Bernstein, Robbins, and this formative period in their lives.

SOPHIE REDFERN is an Honorary Research Fellow at the University of Sheffield, UK and Curator for the European Opera Centre.