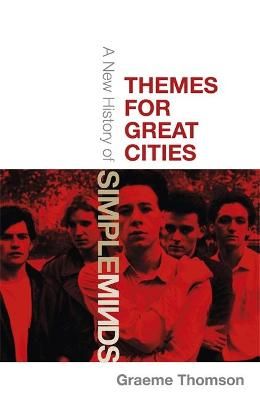 Themes for Great Cities: A New History of Simple Minds

[The] mission here is to "remystify" Simple Minds. It's a wholly successful endeavour . . . Thomson's enthusiasm for tracing the cultural and geographical roots of Simple Minds is infectious,... — MOJO More…

'Nobody owes us anything, but the Simple Minds story has been too condensed. After Live Aid and 'Don't You (Forget About Me)' there hasn't been quite the credit for those first few records. I think they contain some really special music. I can hear the flaws but there's something about the spirit and imagination in them that feels good. They draw from such a wide range of influences ... but the spirit of it was always Simple Minds.' Jim Kerr, to the author

An illuminating new biography of one of Britain's biggest and most influential bands, written with the full input and cooperation of Simple Minds, shedding new light on their dazzling art-rock legacy.

Themes for Great Cities features in-depth new interviews with original band members Jim Kerr, Charlie Burchill, Mick MacNeil and Derek Forbes, alongside key figures from within their creative community and high-profile fans such as Bobby Gillespie, James Dean Bradfield and Mogwai's Stuart Braithwaite. The book reclaims and revivifies the magnificence of Simple Minds' pioneering early albums, from the glitchy Euro-ambience of Real to Real Cacophony and Empires and Dance to the pulsing, agitated romance of Sons and Fascination, New Gold Dream and beyond.

Emerging in 1978 from Glasgow's post-punk scene, Simple Minds transitioned from restless art-rock to electro futurism, mutated into passionate pop contenders and, finally, a global rock behemoth. They have sold in the region of 60 million records and remain a worldwide phenomenon. The drama of their tale lies in these transformations and triumphs, conflicts and contradictions.

Themes for Great Cities tells the inside story of a band becoming a band. Inspiring, insightful and enlightening, it celebrates the trailblazing music of one of Britain's greatest groups.

[The] mission here is to "remystify" Simple Minds. It's a wholly successful endeavour . . . Thomson's enthusiasm for tracing the cultural and geographical roots of Simple Minds is infectious, and the result shines a bright light into the forgotten corners of the band's story -- Tom Doyle