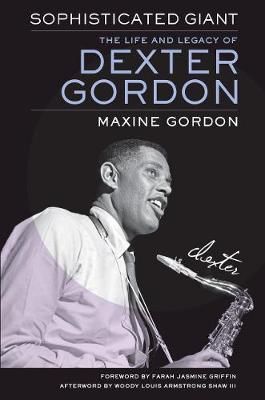 New, Sophisticated Giant: The Life and Legacy of Dexter Gordon

Sophisticated Giant presents the life and legacy of tenor saxophonist Dexter Gordon (1923-1990), one of the major innovators of modern jazz. In a context of biography, history, and memoir, Maxine Gordon has completed the book that her late husband began, weaving his "solo" turns with her voice and a chorus of voices from past and present. Reading like a jazz composition, the blend of research, anecdote, and a selection of Dexter's personal letters reflects his colorful life and legendary times. It is clear why the celebrated trumpet genius Dizzy Gillespie said to Dexter, "Man, you ought to leave your karma to science."

Dexter Gordon the icon is the Dexter beloved and celebrated on albums, on film, and in jazz lore--even in a street named for him in Copenhagen. But this image of the cool jazzman fails to come to terms with the multidimensional man full of humor and wisdom, a figure who struggled to reconcile being both a creative outsider who broke the rules and a comforting insider who was a son, father, husband, and world citizen. This essential book is an attempt to fill in the gaps created by our misperceptions as well as the gaps left by Dexter himself.