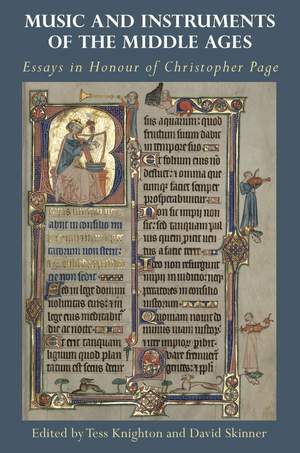 Music and Instruments of the Middle Ages: Essays in Honour of Christopher Page

Christopher Page is one of the most influential and distinguished scholars and performers of medieval music. His first book, Voices and Instruments of the Middle Ages (1987), marked the beginning of what might be called the "Page turn" in the study and performance of medieval music. His many subsequent publications, radio broadcasting (notably the series Spirit of the Age) and performances and recordings with his ensemble Gothic Voices changed the perception of and thinking about music from before about 1400 and forged new ways of communicating its essence to scholars as well as its subtle beauty to wider audiences.
The essays presented here in his honour reflect the broad range of subject-matter, from the earliest polyphony to the conductus and motet of the thirteenth and fourteenth centuries, the troubadour and trouvere repertories, song and dance, church music, medieval music theory, improvisation techniques, historiography of medieval music, musical iconography, instrumental music, performance practice and performing, that has characterised Page's major contribution to our knowledge of music of the Middle Ages.

TESS KNIGHTON is an ICREA Research Professor affiliated to the Institucio Mila i Fontanals-CSIC in Barcelona and an Emeritus Fellow of Clare College, Cambridge; DAVID SKINNER is Fellow and Osborn Director of Music at Sidney Sussex College, Cambridge, and director of the early music ensemble Alamire.