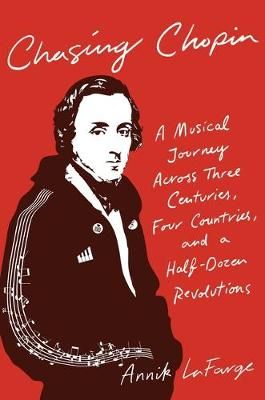 The Frederic Chopin Annik LaFarge presents here is not the melancholy, sickly, romantic figure so often portrayed. The artist she discovered is, instead, a purely independent spirit: an innovator who created a new musical language, an autodidact who became a spiritually generous, trailblazing teacher, a stalwart patriot during a time of revolution and exile.

In Chasing Chopin she follows in his footsteps during the three years, 1837-1840, when he composed his iconic "Funeral March"-using its composition story to illuminate the key themes of his life: a deep attachment to his Polish homeland; his complex relationship with writer George Sand; their harrowing but consequential sojourn on Majorca; the rapidly developing technology of the piano, which enabled his unique tone and voice; social and political revolution in 1830s Paris. Each of these threads-musical, political, social, personal-is woven through the "Funeral March" in Chopin's Opus 35 sonata, a melody so famous it's known around the world even to people who know nothing about classical music.

The result is an engrossing, page-turning work of musical discovery and an artful portrayal of a man whose work and life continue to inspire artists and cultural innovators in astonishing ways.