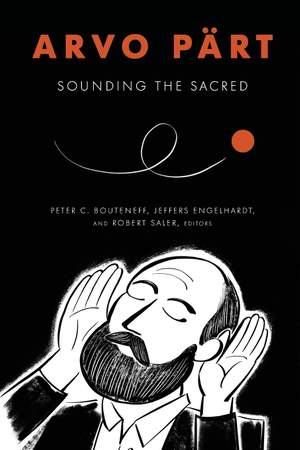 Scholarly writing on the music of Arvo Pärt is situated primarily in the fields of musicology (analyzing Pärt’s signature “tintinnabuli” method), cultural and media studies (Pärt’s audience is uncannily broad within and beyond the contemporary classical world) and, more recently, in terms of theology/spirituality (Pärt is primarily a composer of sacred music). For the most part, this work is centered around the representational dimensions of Pärt’s music (including the trope of silence), writing and listening past the fact that its storied effects and affects are carried first and foremost as vibrations through air, impressing themselves on the human body. In response, this ambitiously interdisciplinary volume asks: What of sound and materiality as embodiments of the sacred, as historically specific artifacts, and as elements of creation deeply linked to the human sensorium in Pärt studies?

In taking up these questions, Arvo Pärt: Sounding the Sacred “de-Platonizes” Pärt studies by demystifying the notion of a single “Pärt sound.” It offers innovative, critical analyses of the historical contexts of Pärt’s experimentation, medievalism, and diverse creative work; it re-sounds the acoustic, theological, and representational grounds of silence in Pärt’s music; it listens with critical openness to the intersections of theology, sacred texts, and spirituality in Pärt’s music; and it positions sensing, performing bodies at the center of musical experience. Building on the conventional score-, biography-, and media-based approaches, this volume reframes Pärt studies around the materiality of sound, its sacredness, and its embodied resonances within secular space.