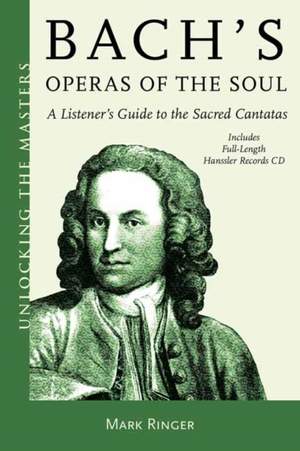 New, Bach's Operas of the Soul: A Listener's Guide to the Sacred Cantatas

Bach's Operas of the Soul is the first introduction for the general music lover to Bach's sacred cantatas to appear in nearly half a century. In clear and accessible language, Mark Ringer examines this vast output of masterpieces as the great musical dramatic creations that they are in order to open these works to a wider audience. Bach's sacred cantatas represent an almost superhuman artistic and spiritual achievement, arguably the richest investment by a great composer within a single genre. But outside of a handful of pieces, they remain a closed book to a majority of serious listeners already familiar with Bach's large-scale religious works. Nevertheless, the same musical-dramatic genius of Bach's Passions is fully evident in virtually all of the composer's sacred cantatas. This book's innovative approach to Bach's Sacred Cantatas is to think of them as sermons in musical-dramatic form, un-staged operas, planned for each occasion of the church year. Bach's ability to dramatize text through music is unmatched throughout history. His era relished dramatic contrast and Bach's use of the human voice offers a constantly changing pallet of vocal colors. The singers play 'roles' throughout the cantatas from penitent sinner, to ardent believer, to Christ himself. The emotions and dramatic situations expressed are as varied as the human condition. This book will be of use to readers interested in opera and vocal music who have already come to love Bach's Passions and who want to familiarize themselves with this wide array of masterpieces.