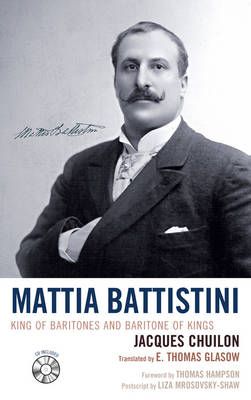 Mattia Battistini: King of Baritones and Baritone of Kings

Mattia Battistini (1856-1928) is considered by many to be among the finest examples of the bel canto singing style. His unique vocal abilities and strong stage personality made him the most famous singer of his time, with a career spanning nearly 50 years in the most revered opera venues in Europe. Mattia Battistini: King of Baritones and Baritone of Kings covers the singer's entire career, from his first performance in Rome in 1878 to his final concert 50 years later. Jacques Chuilon analyzes Battistini's principle roles, recordings, and vocal technique, accessing a rich collection of reviews from the time to show Battistini's relationship with and influence on the day's top composers, such as Wagner, Verdi, and Massenet, even going into detail on how Massenet rewrote his music especially for Battistini's voice. Through this important research, Chuilon offers a fresh portrayal of this unique and inspiring, yet often misrepresented, individual. Mattia Battistini: King of Baritones and Baritone of Kings also contains an informative postscript by Battistini's granddaughter, as well as the most complete list ever compiled of Battistini's performances around the world, an impressive selection of photographs, a discography, and a 90-minute CD, re-mastered to reveal the full splendor of Battistini's magnificent voice as nearly as possible. It is an unmatched reference for teachers, students, professional musicians, and singers, as well as the casual opera lover.