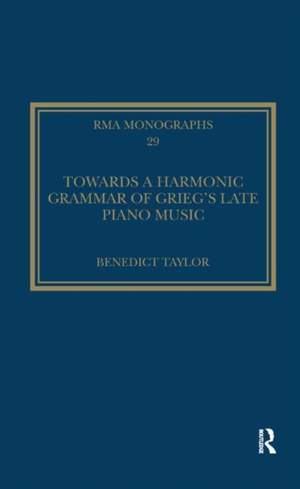 Towards a Harmonic Grammar of Grieg's Late Piano Music: Nature and Nationalism

The music of Edvard Grieg is justly celebrated for its harmonic richness, a feature especially apparent in the piano works written in the last decades of his life. Grieg was enchanted by what he styled the 'dreamworld' of harmony, a magical realm whose principles the composer felt remained a mystery even to himself, and he was not alone, in that the complex nature of late-Romantic harmony around 1900 has proved a keen source of debate up to the present day. Grieg's music forms a particularly profitable repertoire for focusing current debates about the nature of tonality and tonal harmony. Departing from earlier approaches, this study is not simply an inventory of Griegian harmonic traits but seeks rather to ascertain the deeper principles at work governing their meaningful conjunction, how elements of Grieg's harmonic grammar are utilised in creating an extended tonal syntax. Building both on historical theories and more recent developments, Benedict Taylor develops new models for understanding the complexity of late-Romantic tonal practice as epitomised in Grieg's music. Such an investigation casts further valuable light on the twin issues of nature and nationalism long connected with the composer: the question of tonality as something natural or culturally constructed and larger historiographical claims concerning Grieg's apparent position on the periphery of the Austro-German tradition.