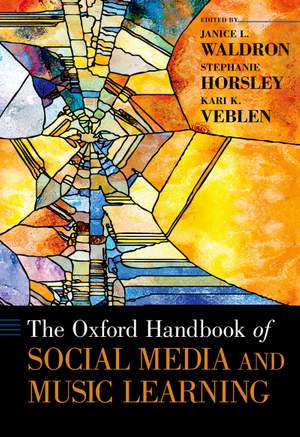 New, The Oxford Handbook of Social Media and Music Learning

The rapid pace of technological change over the last decade, particularly the rise of social media, has deeply affected the ways in which we interact as individuals, in groups, and among institutions to the point that it is difficult to grasp what it would be like to lose access to this everyday aspect of modern life. The Oxford Handbook of Social Media and Music Learning investigates the ways in which social media is now firmly engrained in all aspects of music education, providing fascinating insights into the ways in which social media, musical participation, and musical learning are increasingly entwined. In five sections of newly commissioned chapters, a refreshing mix of junior and senior scholars tackle questions concerning the potential for formal and informal musical learning in a networked society. Beginning with an overview of community identity and the new musical self through social media, scholars explore intersections between digital, musical, and social constructs including the vernacular of born-digital performance, musical identity and projection, and the expanding definition of musical empowerment. The fifth section brings this handbook to full practical fruition, featuring firsthand accounts of digital musicians, students, and teachers in the field. The Oxford Handbook of Social Media and Music Learning opens up an international discussion of what it means to be a musical community member in an age of technologically mediated relationships that break down the limits of geographical, cultural, political, and economic place.