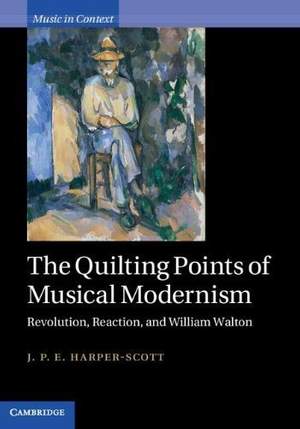 Modernism is both a contested aesthetic category and a powerful political statement. Modernist music was condemned as degenerate by the Nazis and forcibly replaced by socialist realism under the Soviets. Sympathetic philosophers and critics have interpreted it as a vital intellectual defence against totalitarianism, yet some American critics consider it elitist, undemocratic and even unnatural. Drawing extensively on the philosophy of Heidegger and Badiou, The Quilting Points of Musical Modernism proposes a new dialectical theory of faithful, reactive and obscure subjective responses to musical modernism, which embraces all the music of Western modernity. This systematic definition of musical modernism introduces readers to theory by Badiou, Zizek and Agamben. Basing his analyses on the music of William Walton, Harper-Scott explores connections between the revolutionary politics of the nineteenth and twentieth centuries and responses to the event of modernism in order to challenge accepted narratives of music history in the twentieth century.