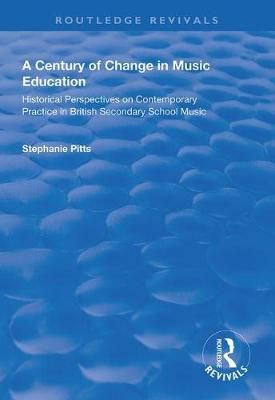 Published in 2000. Education in our schools is a constant feature of media headlines, often blamed for many of society's ills. Perceived throughout the ages as civilizing force, music has a fundamental role to play in education, yet the last twenty years have seen a consistent erosion of the time and money made available to music teachers in our schools.

This book is a timely reminder of how we have arrived at the current debates and challenges of music education. Stephanie Pitts charts the history of music teaching in British secondary schools over the course of the twentieth century. Each chapter looks at a significant period of music education history in which the ideas and practices of a generation were established, and refined. The main educational publications of each decade are examined, from the early by MacPherson, Somervell and Yorke Trotter to the more recent thinking of Paynter and Swanwick.

The shifting perceptions of music in the school curriculum are nowhere better highlighted than in the changing focus on children's engagement with music, from the musical appreciation lessons of the 1920's and 1930's to the post-war concentration on performance and the 1970's emphasis on improvisation and composition. There and many other trends are discussed in the book, allowing today's music educators to see their own practice in its historical context.