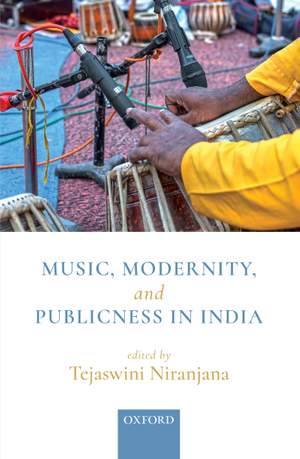 A collection of essays that focus on the role of music in the formation of a public in India across the twentieth century, Music, Modernity, and Publicness in India looks at different regions, languages, and different genres and styles of music. Modernity fundamentally changed the relationship between private and public realms. New social arrangements gave rise to new forms of music making, with the musicians no longer performing exclusively in the princely courts or in the private homes of the wealthy. Not only did the act of listening to, and appreciating music became an important feature of public life in modern times, it also influenced how modernity itself took shape. Music became a key site for the articulation of questions of the public and of politics, and the essays in this volume look at various such aspects, from the formation of modern spaces of performance, certain forms of music assuming the status of classic, creation of a national and nationalistic tradition, and circulation of music in popular politics to broadcast technology. Through exploring these diverse inter-disciplinary questions relating to music, musicians, and their audiences, the volume provides new entry-points for the discussion of music and modern-day cultural practice in India.