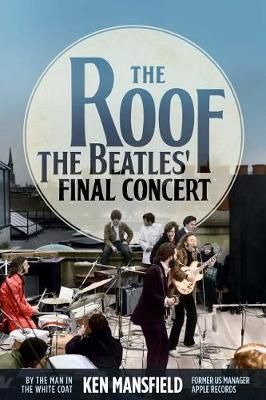 HE WAS THERE! Apple Records former US manager Ken Mansfield takes a touching and comprehensive look back on one of Rock'n'Roll's most significant events, while bringing an insider's perspective to the days leading up to those 42 fascinating minutes of the Beatles monumental Rooftop Concert.

There are moments in time that cause us to stop and take notice of where we were and what we were doing when they happen in order to commit the experience to memory-how it made us feel, who was there with us, why it felt important. January 30, 1969 was one of those moments.

There are those who were on the periphery of the event that day and heard what was going on; but as one of the few remaining insiders who accompanied the Beatles up onto the cold windswept roof of the Apple building, Ken Mansfield had a front row seat to the full sensory experience of the moment and witnessed what turned out to be beginning of the end. Ken shares in The Roof: The Beatles Final Concert, the sense that something special was taking place before his eyes that would live on forever in the hearts and souls of millions.

As the US manager of Apple, Ken Mansfield was on the scene in the days, weeks, and months leading up to this monumental event. He shares his insights into the factors that brought them up onto that roof and why one of the greatest bands of all time left it all on that stage. Join Ken as he reflects on the relationships he built with the Fab Four and the Apple corps and what each player meant to this symphony of music history.