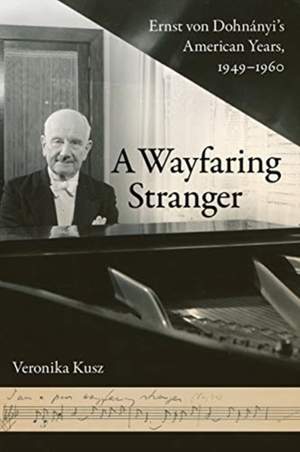 On March 10, 1948, world-renowned composer and pianist Ernst von Dohnanyi (1877 1960) embarked for the United States, leaving Europe for good. Only a few years earlier, the seventy-year-old Hungarian had been a triumphant, internationally admired musician and leading figure in Hungarian musical life. Fleeing a political smear campaign that sought to implicate him in intellectual collaboration with fascism, he reached American shores without a job or a home. A Wayfaring Stranger presents the final period in Dohnanyi's exceptional career and uses a range of previously unavailable material to reexamine commonly held beliefs about the musician and his unique oeuvre. Offering insights into his life as a teacher, pianist, and composer, the book also considers the difficulties of emigre life, the political charges made against him, and the compositional and aesthetic dilemmas faced by a conservative artist. To this rich biographical account, Veronika Kusz adds an in-depth examination of Dohnanyi's late works-in most cases the first analyses to appear in musicological literature. This corrective history provides never-before-seen photographs of the musician's life in the United States and skillfully illustrates Dohnanyi's impact on European and American music and the culture of the time.