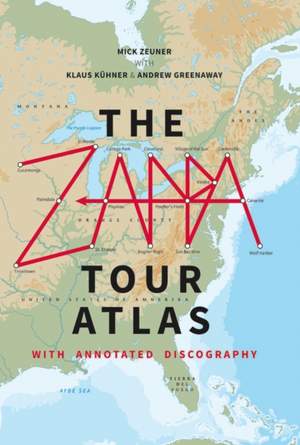 Following the inception of his band The Mothers Of Invention in 1965, Frank Zappa toured incessantly. While he undertook fewer tours throughout the eighties - and even threatened to quit performing altogether - time and again he was drawn back out onto the road and only finally stopped when his health dictated it. This book attempts to explain this allure by providing the most comprehensive listing ever of every concert date and venue - from Osaka to the Albert Hall - revealing the thousands of miles travelled by Zappa and his myriad cohorts to a total of twenty countries during more than twenty five years of live performance. This unique multilateral collaboration - by FZ historian Zeuner, crack cartographer Kuhner and renowned Zappa author Greenaway - guides the reader through a period that saw a great number of changes around the planet (sexual liberation, the ending of the Vietnam War, and the fall of the Berlin Wall), and is proof positive that touring can make you crazy! Also included are maps that trace the locations of all of the places Zappa ever called home. With a foreword by Robert Martin (band member from 1981 until Zappa ceased touring), this book will not only delight fans of Frank and his music, but will appeal to anyone with a passing interest in topography or the travels and travails of bands during the golden age of rock music. Combining contemporaneous maps, detailed tour statistics and reviews of each of Zappa's 111 official albums, it is an original and informative overview of an extraordinary artist.