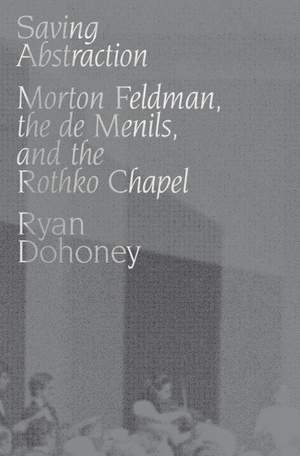 Saving Abstraction: Morton Feldman, the de Menils, and the Rothko Chapel tells the story of the 1972 premier of Morton Feldman's music for the Rothko Chapel in Houston. Built in 1971 for "people of all faiths or none," the chapel houses 14 monumental paintings by famed abstract expressionist Mark Rothko, who had committed suicide in only one year earlier. Upon its opening, visitors' responses to the chapel ranged from spiritual succor to abject tragedy-the latter being closest to Rothko's intentions. However the chapel's founders-art collectors and philanthropists Dominique and John de Menil-opened the space to provide an ecumenically and spiritually affirming environment that spoke to their avant-garde approach to Catholicism. A year after the chapel opened, Morton Feldman's musical work Rothko Chapel proved essential to correcting the unintentionally grave atmosphere of the de Menil's chapel, translating Rothko's existential dread into sacred ecumenism for visitors. Author Ryan Dohoney reconstructs the network of artists, musicians, and patrons who collaborated on the premier of Feldman's music for the space, and documents the ways collaborators struggled over fundamental questions about the emotional efficacy of art and its potential translation into religious feeling. Rather than frame the debate as a conflict of art versus religion, Dohoney argues that the popular claim of modernism's autonomy from religion has been overstated and that the two have been continually intertwined in an agonistic tension that animates many 20th-century artistic collaborations.