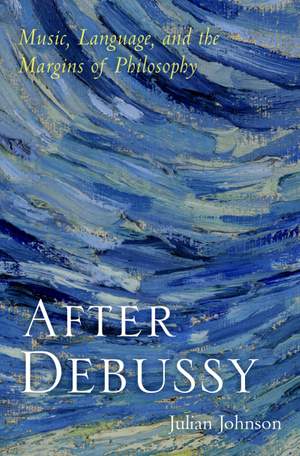 After Debussy: Music, Language, and the Margins of Philosophy

Classical music shows a close relationship to language, and both musicology and philosophy have tended to approach music from that angle, exploring it in terms of expression, representation, and discourse. This book turns that idea on its head. Focusing on the music of Debussy and its legacy in the century since his death, After Debussy offers a groundbreaking new perspective on twentieth-century music that foregrounds a sensory logic of sound over quasi-linguistic ideas of structure or meaning. Author Julian Johnson argues that Debussy's music exemplifies this idea, influencing the music of successive composers who took up the mantle of emphasizing sound over syntax, sense over signification. In doing so, this music not only anticipates a central problem of contemporary thought-the gap between language and our embodied relation to the world-but also offers a solution. With a readable narrative structure grounded in an impressive body of literature, After Debussy ranges widely across French music, demonstrating the impact of Debussy's music on composers from Faure and Ravel to Dutilleux, Boulez, Grisey, Murail and Saariaho. It ranges similarly through a set of French writers and philosophers, from Mallarme and Proust to Merleau-Ponty, Jankelevitch, Derrida, Lyotard and Nancy, and even draws from the visual arts to help embody key ideas. In accessibly tackling substantial ideas of both musicology and philosophy, this book not only presents bold new ways of understanding each discipline but also lays the groundwork for exciting new discourse between them.