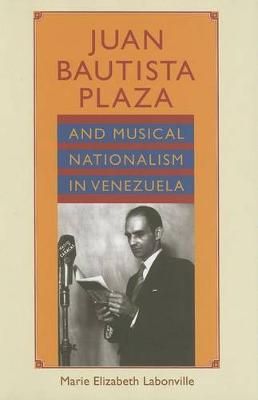 Juan Bautista Plaza (1898-1965) was one of the most important musicians in the history of Venezuela. In addition to composing in a variety of genres and styles, he was the leading figure in Venezuelan music education and musicology at a time when his compatriots were seeking to solidify their cultural identity. Plaza's compositions in the emerging nationalist style and his efforts to improve musical institutions in his home country parallel the work of contemporaneous Latin American musicians including Carlos Chavez of Mexico, Amadeo Roldan of Cuba, and Camargo Guarnieri of Brazil.

Plaza's life and music are little studied, and Labonville's ambitious book is the first in English to be based on his extensive writings and compositions. As these and other documents show, Plaza filled numerous roles in Venezuela's musical infrastructure including researcher, performer, teacher, composer, promoter, critic, chapel master, and director of national culture. Labonville examines Plaza's many roles in an attempt to assess how the nationalist spirit affected art music culture in Venezuela, and what changes it brought to Venezuela's musical landscape.