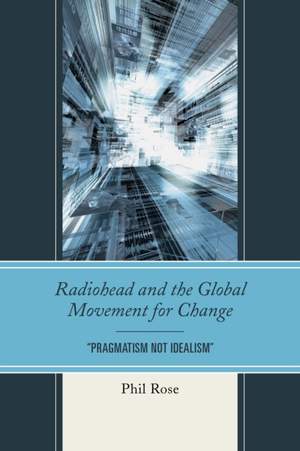 Radiohead and the Global Movement for Change: "Pragmatism Not Idealism"

Even prior to the field's invention, Susanne Langer implied that the arts are all subtopics of Communication Studies. This unique project has effectively allowed the author to combine his backgrounds in the interdisciplinary fields of popular music studies, cultural theory, communication studies, and the practice of music criticism. This book investigates the fascinating and important work of the British group Radiohead, named by Time Magazine among its Top 100 Most Influential People of 2008, and focuses particularly on their landmark recording OK Computer (1997), a document preserved as part of the Library of Congress National Recording Registry in 2015. Probing the band's exploration of the crucial issues surrounding contemporary technological development, especially as it relates to the concern of human survival, Radiohead and the Global Movement for Change is essentially a work of criticism that in its analysis combines what is known as 'musical hermeneutics' with the media ecology perspective. In this way, the author delineates how Radiohead's work operates as a clarion call that directs our attention to the troubling complex of cultural conditions that Neil Postman (1992) identifies as 'Technopoly' or 'the surrender of culture to technology'-a phenomenon that must become more broadly recognized and comprehended in order for it to be successfully confronted. This book's distinguishing features include: 1) its edifying analysis of a richly profound and celebrated musical text; 2) its extended focus upon what Martin Heidegger famously refers to as 'the question concerning technology'; 3) its use of the media ecology scholarly tradition at whose core lies communication study; and 4) its innovative and unique deployment of the affect-script theory of American personality theorist Silvan Tomkins in the study of musical communication.