Music and Culture in Eighteenth-century Europe: A Source Book 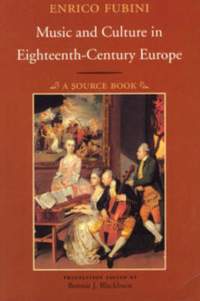 Music and Culture in Eighteenth-Century Europe: A Source Book

This volume features key writings about 18th-century music. It brings together a selection of essential documents not only about music theory and practice, but about the historical, philosophical, aesthetic, ideological and literary debates which held sway during a century when musical thought and criticism gained a privileged position in the culture of Europe. Enrico Fubini offers a sampling of English, French, German and Italian writings on topics ranging from Enlightenment rationalism and the theories of harmony to German musical culture and the polemics on J.S. Bach. Organized by topic and historical period these selections go beyond writings dealing exclusively with specific musical works to larger issues of theory and the reception of musical ideas in the culture at large. The selections are from books, journals, newspapers, pamphlets and letters. The contributors include Diderot, Rousseau, Voltaire, Grimm, Alfieri, Rameau, Quantz, Gluck, Tartini, Leopold and W.A. Mozart, and C.P.E. Bach. Many are translated here for the first time. With general and chapter introductions, restored footnotes and other valuable annotations, and a biographical appendix, this anthology should be of interest to music scholars, students and teachers.