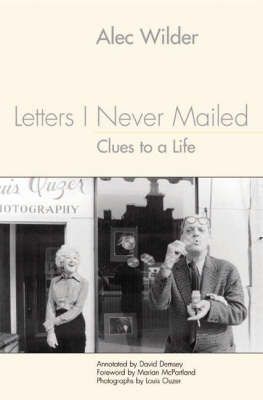 Letters I Never Mailed: Clues to a Life: 35

Letters I Never Mailed: Clues to a Life, by Alec Wilder, in a new, annotated edition with introduction and supplementary material by David Demsey, foreword by jazz pianist Marian McPartland, and photographs by Louis Ouzer.
Alec Wilder is a rare example of a composer who established a reputation both as a prolific composer of concertos, sonatas, and operas, and as a popular songwriter [including the hit "I'll Be Around"]. He was fearsomely articulate and had a wide and varied circle of friends ranging from Graham Greene to Frank Sinatra and Stan Getz. Letters I Never Mailed, hailed at its first publication [in 1975, by Little, Brown], tells the story of Wilder's musical and personal life through unsent "letters" addressed to various friends.
In it, he shares his insights -- and sometimes salty opinions -- on composing, musical life, and the tension between art and commercialism. This new, scholarly edition leaves Wilder's original text intact but decodes the mysteries of the original through an annotated index that identifies the letters' addressees, a biographical essay by David Demsey, and photographs by renowned photographer and lifelong friend of Wilder, Louis Ouzer.

David Demsey is Professor of Music and coordinator of jazz studies at William Paterson University and an active jazz and classical saxophonist. He is co-author of Alec Wilder: A Bio-Bibliography [Greenwood Press] and has contributed to The Oxford Companion to Jazz.