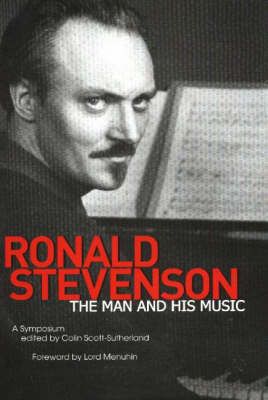 Ronald Stevenson: The Man and his Music. A Symposium.

This collection of essays covers virtually all of Stevenson's enormous output and features contributions from leading authorities. Ronald Stevenson is one of Britain's leading composers, and almost certainly its most prolific. He is best known for his massive Passacaglia on DSCH - at 80 minutes long, the biggest single-movement work in the piano literature. But he has an enormous number of other fine works to his credit: a vast corpus of original and exciting works for the piano, the instrument of which he is an acknowledged master, a number of innovative and impressive scores for orchestra [including four concertos], many attractive pieces of chamber music, and over two hundred songs. All of them testify to Stevenson's enduring belief in the value of melody. Stevenson is also one of the last representatives of the great tradition of Romantic composer-pianists - the tradition that embraced Paderewski and Busoni, two figures with whom he feels a particularly affinity, and whose heritage he has extended, both as performer and creative personality, into the modern age. This collection of essays covers virtually all of Stevenson's enormous output. It features contributions from a number of leading authorities: Malcolm MacDonald on the orchestral music, Ates Orga on the piano works, Alistair Chisholm on the chamber music, Derek Watson on the songs, Harold Taylor on Stevenson's pianism, Jamie Reid Baxter on the choral music and on Stevenson's position in Scottish culture. It also reproduces a selection of Stevenson's exquisite piano miniatures, in facsimiles of the composer's calligraphic script. In a Foreword written shortly before his death, Lord Menuhin describes Stevenson as 'one of the most original minds in the composition of music' and predicts that 'his music will be appreciated more and more'. This book is a major step in that process of discovery. COLIN SCOTT-SUTHERLAND has contributed several articles on RonaldStevenson's work to various journals, and a chapter on his music to British Music Now.