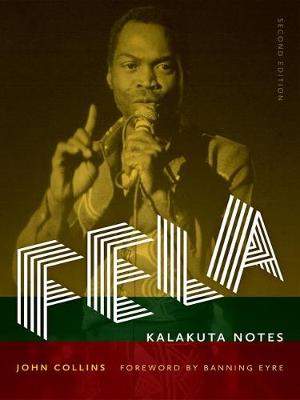 Fela: Kalakuta Notes is an evocative account of Fela Kuti - the Afrobeat superstar who took African music into the arena of direct action. With his antiestablishment songs, he dedicated himself to Pan-Africanism and the down-trodden Nigerian masses, or "sufferheads." In the 1970s, the British/Ghanaian musician and author John Collins met and worked with Fela in Ghana and Nigeria. Kalakuta Notes includes a diary that Collins kept in 1977 when he acted in Fela's autobiographical film, Black President. The book offers revealing interviews with Fela by the author, as well as with band members, friends, and colleagues. For the second edition, Collins has expanded the original introduction by providing needed context for popular music in Africa in the 1960s and the influences on the artist's music and politics. In a new concluding chapter, Collins reflects on the legacy of Fela: the spread of Afrobeat, Fela's musical children, Fela's Shrine and Kalakuta House, and the annual Felabration. As the dust settles over Fela's fiery, creative, and controversial career, his Afrobeat groove and political message live on in Kalakuta Notes. Features a new foreword by Banning Eyre, an up-to-date discography by Ronnie Graham, a timeline, historical photographs, and snapshots by the author.