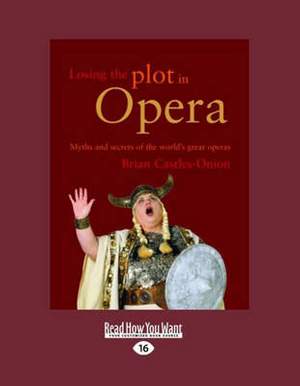 Losing the Plot In Opera: Myths And Secrets of the World's Great Operas

The world of opera is a mystery to some and a comedy to others, but it is deadly serious to the people who live and breathe it. Opera conductor Brian Castles-Onion has seen opera from all sides and has decided to step back and reflect on the great operas and on the people who bring them to the stage. In this book he offers light-hearted accounts of some of the best-known operas, spiced with anecdotes and behind-the-scenes gossip, as well as his impressions of the famous stereotypes of the operatic world: emotional sopranos, bitchy tenors, incompetent choruses and rebellious orchestras. The operas may be tragic, but Brian's re-tellings of Tosca, La bohme, Turandot, Carmen, Madama Butterfly, La Traviata and more are hilarious - and strangely informative. The specialised worlds of Wagner and Gilbert & Sullivan do not escape his acid wit, and he also casts a wry eye over some of his fellow-conductors. Altogether, this is a book that will delight both the seasoned opera buff and the opera virgin: settle in your armchair and prepare to be entertained!