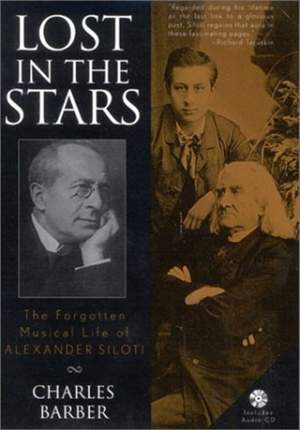 Lost in the Stars: The Forgotten Musical Life of Alexander Siloti

Alexander Siloti (1863-1945), a name associated with musical greats such as Tchaikovsky, Liszt, and Rachmaninoff, was a pianist, conductor, impresario, advocate for new music, and mentor of new composers; a musical great in his own right. Lost in the Stars is Charles Barber's recreation of the vital times in which Siloti lived: the St. Petersburg musical culture and Russia's Silver Age of music. Barber highlights Siloti's move to America, where he spent his days teaching, far away from his remarkable career that earned him glowing reviews in Russia. Barber also focuses on Siloti's own tastes and aesthetics and his role in the broader artistic life of his era. The text also examines the "why" behind Siloti's almost forgotten legacy and discusses the slow reappearance of Siloti's music in our times, partly due to the ardent work of his admirers. In addition to containing the first-ever catalogue of Siloti's works, as well as a performer and repertoire list of his concert series, the book also contains the world-premiere release of a Naxos CD of a dozen Bach-Siloti transcriptions performed by pianist James Barbagallo. An important addition to any musician's collection, Lost in the Stars will be of special value to conductors, pianists, and piano teachers. Libraries with collections in music or that support a curriculum in music history will also find the text to be a valuable source, not only for scholars, but for those interested in 20th century Russian music as well.