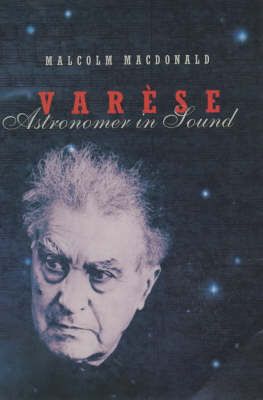 The works of Edgard Varese (1883-1965) represent the most radical expression of 20th-century Modernism in music. Not only did he create such orchestral showpieces as "Ameriques" and "Arcana" and such mainstays of the instrumental repertoire as "Octandre" and "Density 21:5"; he also pioneered works for percussion ensemble and electronic music, both on tape and using electronic instruments. Yet books about Varese are few. Either they are biographical studies by non-musicians, or severely analytical treatises beyond the reach of the majority of music lovers who are likely to hear his works in concert. This book takes a different approach. Within a chronological scheme, its core is a series of descriptive analyses; accessible to any literate music-lover, of all Varese's available works. Malcolm MacDonald relates them to the ideas, both aesthetic and scientific, which underlay Varese's boldly original view of sound and musical structure.He shows how Varese's conception of a music that "explodes into space", of "intelligent sounds moving in space" arose from 20th-century man's expanding consciousness of his place in the universe, but also from the esoteric philosophies of late 19th-century Paris, inspired by Renaissance alchemists such as Paracelsus. Much of Varese's output is destroyed, but it is possible to infer much about his lost early works, his vast stage of composition about communication with the star Sirius, and the unachieved choral symphony "Espace", designed to be performed simultaneously in the various capitals of the world. This is also the first book to discuss the previously unpublished Varese scores released for performance in 1998 by Varese executor Chou Wen Chung.