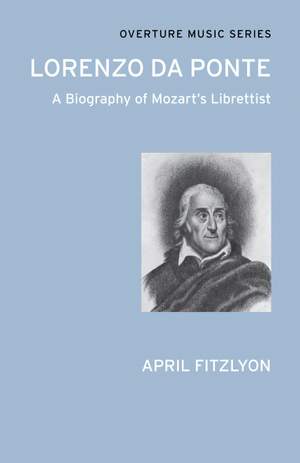 This is the revised edition of April FitzLyon’s celebrated biography of Mozart’s librettist, who provided the brilliant, witty texts for The Marriage of Figaro, Don Giovanni and Così fan tutte. Born a Jew in the Republic of Venice, Da Ponte became a Christian before involving himself in political and amorous intrigue and having to flee, like his friend Casanova, to Vienna, pursued by both the Inquisition and jealous husbands. As court poet to Joseph II he succeeded Metastasio and worked with many composers, until his escapades forced him to move on to London, where he managed the Theatre Royal, Haymarket. After a series of financial disasters, he moved to New York, where he worked several jobs before becoming a professor at Columbia. He helped to introduce Italian opera to the USA and in old age wrote his notoriously unreliable memoirs.

This fascinating portrait provides a colourful picture of eighteenth- and nineteenth-century life in four capitals, combining musical and literary history with an account of the social life of the period.