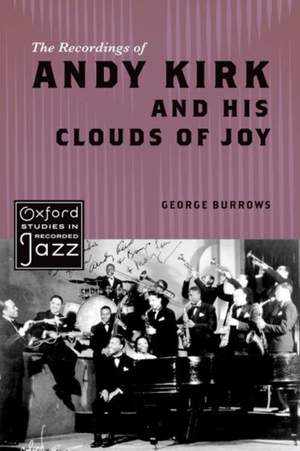 The Recordings of Andy Kirk and his Clouds of Joy

In this vital and accessible exploration of the recordings of Andy Kirk and His Clouds of Joy, George Burrows challenges readers to examine how the construct of "racial authenticity" negatively... — ARSC Journal More…

Andy Kirk's Clouds of Joy came from Kansas City to find nationwide fame in the later 1930s. The many records they made between 1929 and 1949 came to exemplify the Kansas City style of jazz, but they were also criticized for their populism and inauthenticity. In The Recordings of Andy Kirk' and his Clouds of Joy, George Burrows considers these records as representing negotiations over racialized styles between black jazz musicians and the racist musicindustry during a vital period of popularity and change for American jazz.

The book explores the way that these reformative negotiations shaped and can be heard in the recorded music. By comparing the band's appropriation of musical styles to the manipulation of masks in black forms of blackface performance, bothsignifying and subverting racist conceptions of black authenticity, it reveals how the dynamic between black musicians, their audiences and critics impacted upon jazz as a practice and conception.

In this vital and accessible exploration of the recordings of Andy Kirk and His Clouds of Joy, George Burrows challenges readers to examine how the construct of "racial authenticity" negatively underpins jazz culture...Burrows' work accomplishes exactly what it sets out to do: it "amplifies resistance to seemingly innocent but racist conceptions and structures that underpin the music...in an era when to speak loudly about such things is at least as urgent as ever it was" Amen to that