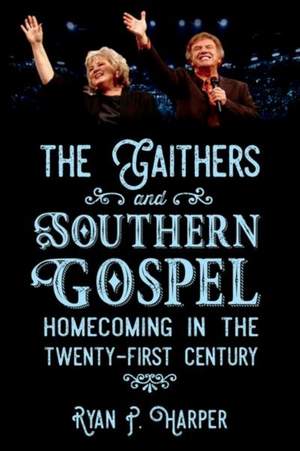 The Gaithers and Southern Gospel: Homecoming in the Twenty-First Century

The Gaithers and Southern Gospel is a fascinating and absorbing study that will appeal not only to Gaither Homecoming fans, but also to those who want to learn more about Bill, Gloria, and their... — ARSC Journal More…

In The Gaithers and Southern Gospel, Ryan P. Harper examines songwriters Bill and Gloria Gaither's Homecoming video and concert series--a gospel music franchise that, since its beginning in 1991, has outperformed all Christian and much secular popular music on the American music market.

The Homecomings represent ""southern gospel."" Typically that means a musical style popular among white evangelical Christians in the American South and Midwest, and it sometimes overlaps in style, theme, and audience with country music. The Homecomings' nostalgic orientation--their celebration of ""traditional"" kinds of American Christian life--harmonize well with southern gospel music, past and present. But amidst the backward gazes, the Homecomings also portend and manifest change. The Gaithers' deliberate racial integration of their stages, their careful articulation of a relatively inclusive evangelical theology, and their experiments with an array of musical forms demonstrate that the Homecoming is neither simplistically nostalgic, nor solely ""southern.""

Harper reveals how the Gaithers negotiate a tension between traditional and changing community norms as they seek simultaneously to maintain and expand their audience as well as to initiate and respond to shifts within their fan base. Pulling from his field work at Homecoming concerts, behind the scenes with the Gaithers, and with numerous Homecoming fans, Harper reveals the Homecoming world to be a dynamic, complicated constellation in the formation of American religious identity.

The Gaithers and Southern Gospel is a fascinating and absorbing study that will appeal not only to Gaither Homecoming fans, but also to those who want to learn more about Bill, Gloria, and their Indiana-based Gaither media empire. And, as it is an excellent reflection on the sociological changes taking place in twenty-first-century America, students of social science will find its reflections revealing