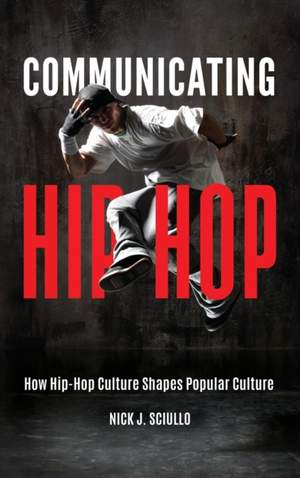 This insightful analysis of the broad impact of hip-hop on popular culture examines the circulation of hip-hop through media, academia, business, law, and consumer culture to explain how hip-hop influences thought and action through our societal institutions.

How has hip-hop influenced our culture beyond the most obvious ways (music and fashion)? Examples of the substantial power of hip-hop culture include influence on consumer buying habits-for example, Dr. Dre's Beats headphones; politics, seen in Barack Obama's election as the first "hip-hop president" and increased black political participation; and social movements such as various stop-the-violence movements and mobilization against police brutality and racism.

In Communicating Hip-Hop: How Hip-Hop Culture Shapes Popular Culture, author Nick Sciullo considers hip-hop's role in shaping a number of different aspects of modern culture ranging from law to communication and from business to English studies. Each chapter takes the reader on a behind-the-scenes tour of hip-hop's importance in various areas of culture with references to leading literature and music. Intended for scholars and students of hip-hop, race, music, and communication as well as a general audience, this appealing, accessible book will enable readers to understand why hip-hop is so important and see why hip-hop has such far-reaching influence.