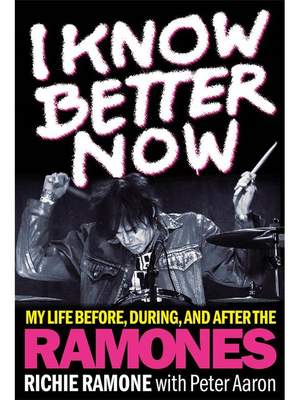 I Know Better Now: My Life Before, During and After the Ramones

It's 1982 and the Ramones are in a gutter-bound spiral. Following a run of inconsistent albums and deep in the throes of internal tensions the legendary quartet is about to crash and burn.THEnter Richie Ramone.THThen a 26-year-old from New Jersey named Richard Reinhardt he's snapped up by the group to be their new drummer and instantly goes from the obscurity of the underground club scene to membership in the most famous punk-rock band of all time revitalizing the pioneering outfit with his powerful precise and blindingly fast beats a composing classic cuts like the menacing anthem Somebody Put Something in My Drink and becoming the only Ramones percussionist to sing lead vocals for the group. With the Ramones he performs over five hundred shows at venues all around the world and records three storming studio albums a before abruptly quitting the band and going deep underground. To most fans this crucial figure in the band's history has remained a mystery his tale untold.THUntil now.THEI Know Better Now: My Life Before During and After the RamonesE is the firsthand four-on-the-floor account of a life in rock 'n' roll and in one of its most influential acts a straight from the sticks of the man who kept the beat.