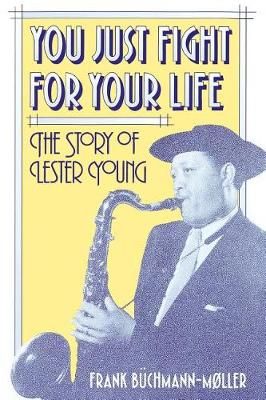 You Just Fight for Your Life: The Story of Lester Young

A Danish musician here presents the most accurate, comprehensive work on a major figure in American jazz: Lester Willis Young (1909-1959), better known as `Pres' or `Prez,' from the nickname `President' given to him by Billie Holiday. Based on interviews with Young's colleagues and friends, and often presenting his own vulgar scatological words, the book faithfully chronicles the ups and downs of his life and career. Despite his alcoholism, drug addiction, syphillis, epilepsy, and emotional disturbances, Young became the outstanding tenor saxophonist of his time and a dominant, profound influence on the development of bop and progressive (`cool') jazz in the 1940s. His solos with the bands of Fletcher Henderson and Count Basie and his collaboration with Holiday are recalled in this outstanding biography. Publishers Weekly

[This is] the big, warm book about Lester Young that swing lovers have been waiting for, written by a Danish jazz musician. This is a rich authentic life of one of the three greatest tenor players who ever lived, much of it told in vivid quotation from eyewitnesses. Kirkus this is the first thoroughgoing biography of one of America's greatest musicians; its fascination for at least jazz aficionados is magnetic....Along with Porter's magisterial work of musical analysis, Lester Young, this is the book to have on the most influential jazzman between Armstrong and Parker. Booklist

By far the most comprehensive work available on the extraordinary Lester Young, You Just Fight For Your Life is the jazz enthusiast's dream come true. Meticulously researched and teeming with previously unpublished information, this book accurately recreates the life and character of one of the world's greatest jazz musicians. Historian Frank Buchmann-Moller crafts a full length biography exclusively for Lester Young fans focusing on Young's philosophy of life, his exceptional ability as a bandleader, and his sharp wit. Through the examination of army psychiatric reports, interviews with fellow musicians, and concert reviews, You Just Fight For Your Life tells the story of this gifted yet troubled musician.

Beginning with his childhood, the book accurately chronicles the many bands in which Lester Young played prior to joining Count Basie in 1936. Through countless interviews with Young's peers, the book recounts the Basie years and the spicy stories of life on the road. The author includes new information about Young's own first band and follows this with details of his military experience. The final chapters deal with his years as featured soloist. Two appendices list all of Young's jobs from 1919-59 and his own bands chronologically as well as all musicians with whom he played. Now Lester Young followers have a full length biography valuable not only as a reference but for its recreation of a fascinating life.