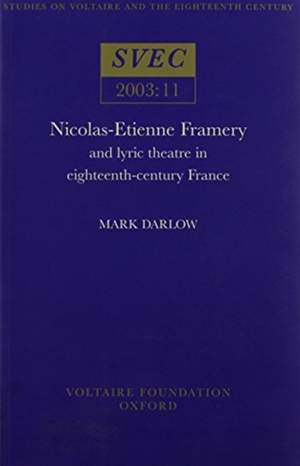 This study offers a reassessment of the librettist, parodist and critic Nicolas-Etienne Framery (1745-1810) whom scholars have frequently mentioned in passing, but whose career remains little known and poorly understood today. Though Framery was also active as a translator of Italian epic works and an occasional author of narrative, this study considers his work as a dramatist and theatrical critic, and demonstrates his constant concern for progress in French lyric theatre. Framery was one of the generation of librettists to write for the new Comedie-Italienne after 1762, and his enthusiasm for the innovative opera-comique was unfailing. His attention to musical terminology made him one of the major contributors, alongside Momigny and Ginguene, to the Encyclopedie methodique: musique. Unlike better-known theorists of music such as Rousseau, Framery adopted a progressive stance towards musical theatre and took an active part, in the 1770s, in the introduction of Italian lyric forms into the French theatre world. Parodies of Sacchini and Paisiello are considered here, as are Framery's theoretical views on composition, on the relationship between music and language, and on operatic word setting. His progressivism extended to journalism (he was the editor of the first periodical on music in France, the Journal de musique, and a columnist for the Mercure de France) and to administrative issues (he acted as agent for the Bureau established to protect authors' rights during the Revolution). Framery's writings for the Journal, for the Encyclopedie methodique, and for the Institut de France show him to be a pioneering thinker on music who preferred the concept of expression to classical theories of music as imitation. Framery's approach led him to adopt a career at variance with tradition and it is only now, in the light of recent research on the opera-comique, that his innovations in the lyric theatre can be properly appreciated.